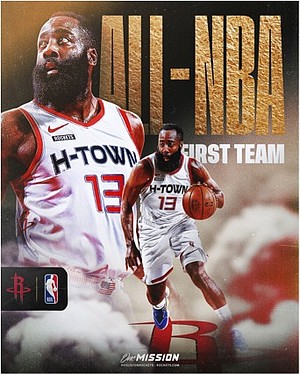 Although the Houston Rockets did not complete their ultimate goal of winning an NBA Championship this year, on Wednesday their two superstars were awarded with some very high praise. The NBA announced their All-NBA teams and the Rockets James Harden (First Team) and Russell Westbrook (Third Team) were announced as two of the top-15 players in the league.

The last time the Rockets had multiple All-NBA performers in a single season was in 2013-14 with Harden (First Team) and Dwight Howard (Second Team).

Harden, the 2019-20 NBA’s leading scorer for the third consecutive season at 34.3 points per game, became the only player to be named All-NBA First Team in each of the past four seasons and has earned the same accolades in seven of his eight seasons with the Rockets.

Houston was eliminated by the Los Angeles Lakers in the semifinals of the 2020 NBA Western Conference playoffs, but Harden still had one of the best seasons in league history. This season marked his second straight of at least 34.0 points per game, 6.0 rebounds, and 7.5 assists. 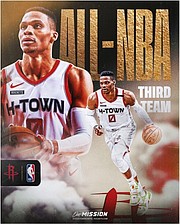 Russell Westbrook made his ninth overall All-NBA in his career and secured his first with the Rockets. Westbrook had an outstanding first season with his backcourt mate Harden as he chipped in 27.2 points per game, 7.0 assists, and 7.9 rebounds. Known for his ferocity on the court, Westbrook had the NBA’s longest streak of scoring 20-plus points this season with a career-best 36-game span from Dec. 7 through Aug. 2.

Westbrook and Harden became the first set of teammates to have averaged at least 27.0 points and 7.0 assists in a single season in NBA history.