Astros open homestand with an outstanding pitching performance by Urquidy 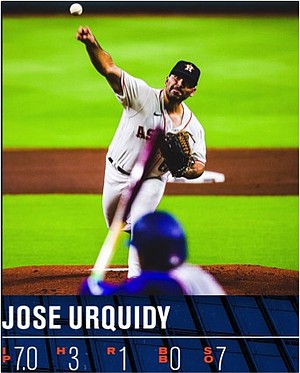 The Houston Astros found some familiar territory on Tuesday at Minute Maid park by defeating the Texas Rangers by a score of 4-1 in the first game of the final homestand for Houston this season. With the win the Astros climb back to .500 with a 24-24 record and are still in second place in the A.L. West with the playoffs near.

George Springer and Martin Maldonado each hit solo homeruns to help solidify a strong pitching performance by starter Jose Urquidy (1-1) who got his first win of the season after missing six weeks with COVID-19 related issues. He allowed three hits in seven innings of work giving up one run, striking out seven batters and did not surrender a walk. Urquidy stymied the bats of the Texas Rangers retiring the first 13 he faced and did not give up a hit until the top of the fifth inning.

“I felt really good out there,” said Urquidy. “I didn’t get tired today. I didn’t feel like I did the last couple of outings. I felt I had something left in the tank.”

Third baseman Alex Bregman helped break a tie game when he hit a bloop-single into left field in the bottom of the seventh inning that drove home two-runs and put the Astros ahead. Reliever Ryan Pressly pitched a scoreless ninth inning to seal the game.

“It is good to have Bregman back because he knows how to drive in runs,” Astros manager Dusty Baker said.

Houston got bit by the injury bug once again on Tuesday that ruined the win and the return of second baseman Jose Altuve to the lineup. Altuve had been out of the lineup since Sept. 4 with a right sprained knee.

Shortstop Carlos Correa had to leave the game in the bottom of the sixth inning after fouling a ball off of his left ankle. He was later diagnosed with a bone bruise and will probably need a few days to heal before heading back on the field.

“He [Correa] was scared and we were scared,” said Baker after the game about his All-Star shortstop.

The Astros have never been a team that has watched the scoreboard and it is something they are not about to start doing towards the end of the season.

“We have control of our own destiny,” said Bregman. "We need to start a good streak of playing well. We haven't had the best last week or two weeks, so hopefully we can build on this."