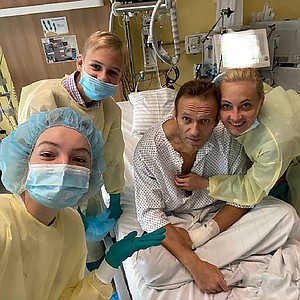 (CNN) -- Russian opposition leader Alexey Navalny has posted a photograph of himself on his hospital bed in Berlin, weeks after he was poisoned and fell critically ill.

Navalny is pictured alongside his family in the photo, which was posted on his Instagram account on Tuesday. The dissident is recovering in Germany but his press secretary has said that he intends to eventually return to Russia.

In his first direct message after his hospitalization, the anti-corruption activist said he was now breathing on his own without medical support.

"Hi, this is Navalny," he wrote in the caption. "I miss you. I still can hardly do anything, but yesterday I was able to breathe on my own for the whole day. Just myself. I did not use any outside help, not even the simplest valve in my throat."

"I liked it very much. An amazing, underestimated process by many. Recommended."

Navalny was poisoned with a chemical nerve agent from the Soviet-era Novichok group, the German government said, and questions remain over the Russian state's involvement in the incident.

Despite this, the Kremlin critic intends to return to his home country after he recovers, his press secretary Kira Yarmysh told CNN in a text message Monday.

"No other option was ever considered," Yarmysh said.

Navalny first became sick on a flight to Moscow from the Siberian city of Tomsk on August 20. He was hospitalized in the city of Omsk following an emergency landing.

He was then flown to Berlin's Charite Hospital two days later in a medical evacuation and has remained in Germany for weeks while being weaned off mechanical ventilation.

On Monday, the hospital said Navalny was able to leave his bed for short periods of time.

The attack on the Kremlin critic has been met with widespread international condemnation.

The German government found that he had been poisoned with a Novichok nerve agent following tests, a conclusion supported by two other labs in France and Sweden.

Novichok was also used in a March 2018 attack on former Russian spy Sergei Skripal in the English city of Salisbury and multiple Russian dissidents have been poisoned in the past.

Berlin has called on Moscow to explain how Navalny was poisoned but the Kremlin has remained defiant in the face of criticism.

Russian President Vladimir Putin called the accusations of Kremlin involvement in the attack "unfounded" and "inappropriate," on Monday, during a call with French President Emmanuel Macron.

"[The two sides] have extensively discussed the situation around the 'Navalny case," the Kremlin's account of Monday's call states.

"Vladimir Putin emphasized the inappropriate nature of unfounded accusations against the Russian side in this context."

The French readout of the call said Macron had stressed to Putin "that all light be shed, without delay, on the circumstances and responsibilities of this attempted assassination."

Kremlin spokesman Dmitry Peskov said Tuesday that any Russian citizen is free to leave and return to Russia and that everyone would be happy if Navanly's health improved.

Speaking in a conference call Tuesday, Peskov added he didn't understand why Russia has not yet been given the same access French and Swedish specialists were granted to test Navalny's medical samples.

The Kremlin spokesman also said he did not see any reason for Navalny and Putin to meet when the opposition leader returns to Russia.