Headed Towards the Home Stretch 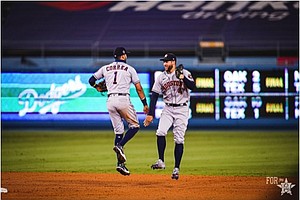 For the Houston Astros, Monday can’t come fast enough. They finally get a rest day after playing a grueling 11-games on the West Coast that left them with a 2-9 record on the road and brings their away record to 7-18 on the season with seven more road games left. Three of those games will be against the Seattle Mariners who currently trail them in the standings for second place in the A.L. West by 1 ½ games.

The Astros are preparing for their final homestand of the 60-game MLB season that was reduced from 162 games due to COVID-19. If Houston has any aspirations of making the playoffs or having any outside chance of securing their fourth consecutive A.L. West division title, they can go no less than 5-1 at home against the Texas Rangers (17-30) and Arizona Diamondbacks (17-31).

“This road trip was a really tough one, but we go home, and we have an off day [Monday] and relax, but overall we have to play better and do whatever you have to do to win games,” said Houston catcher Martin Maldonado.

Minute Maid Park has become a safe haven for the Astros this year where they have won 16 games inside its friendly confines. Only three other teams in MLB has a better home record than Houston. They also hold a six-game advantage over teams below .500 (18-12) which should be a very good way to climb out of the funk they have been in over the last two weeks.

Health has played a major factor in hampering the Astros chances of being more successful this season, but that may change during the homestand as they get two intricate pieces to their lineup and pitching staff back this week.

Former A.L. MVP Jose Altuve is scheduled to return after sitting out the entire road trip from a knee injury and starting pitcher Lance McCullers Jr. will come off the IL to pitch on Wednesday which will be his first action since having to come out earlier this month in a game versus the Los Angeles Angels.

“We need to see better pitching, better defense, better offense,” said Astros manager Dusty Baker after an 8-1 loss to the Los Angeles Dodgers. “We’ve got to get some guys back. We got [Alex] Bregman back and he swung the bat pretty good today. We get [Jose] Altuve back next week. Just get some guys back, get some home cooking and regroup at home.”