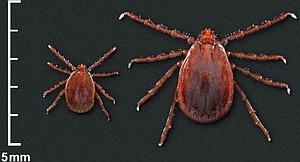 “The Asian longhorned tick is an invasive species that was initially discovered on a farm in New Jersey in 2017, raising public and veterinary health concerns, and has subsequently been found in at least 14 other states,” the CAES said in a press release on Monday.

Experts said the Asian longhorned tick is native to Japan, and parts of Russia and China. It’s also a major livestock pest in Australia and New Zealand, the said.

Dr. Goudarz Molaei, a research scientist who directs the CAES Passive Tick Surveillance and Testing Program, said they will be closely monitoring the tick and human biting activity, “as well as its potential involvement in transmission of exotic and local disease agents.”

“The identification of an established population of the Asian longhorned tick in Connecticut highlights the challenge and risk to human and animal health in the state, though this risk is not limited to Connecticut. The potential is high for invasive ticks capable of transmitting pathogens of human and veterinary concern to become further established in new areas as environments continue to change. Proper surveillance, interception, and identification of exotic ticks are vital to protecting human and veterinary health,” Dr. Molaei said.