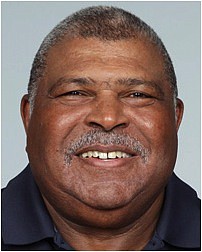 Houston Texans associate head coach Romeo Crennel is that one person that can strike up a friendly conversation with anyone he meets. His outgoing personality lights up any room he steps into. But once that headset goes on and he is calling out schemes and coverages, he is as ferocious as they come. That tenacity was rewarded by the Pro Football Writers of America when they named Crennel the 16th recipient of the Paul “Dr. Z” Zimmerman Award for lifetime achievement as an assistant coach in the NFL.

Crennel is going into his 38th NFL season and has been with the Texans seven of those years. He began his coaching career as a graduate assistant in 1970 at Western Kentucky, his alma mater, before being brought on full time as the defensive line coach for four years. He developed what would become a lifelong working relationship and friendship at his next stop working under defensive coordinator Bill Parcells.

“I have a very high regard for him,” Parcells said. “He’s run the whole gamut, from assistant special teams’ coach, to defensive line to defensive coordinator to head coach. There are only a handful of people you work with for that extended a period of time, and Romeo was one of them.”

That bond between Parcells and Crennel carried over into the NFL as they were both coaches with the New York Giants, a team Crennel spent 12 seasons with multiple roles coaching on the defensive side of the ball and eventually being an intricate piece to the Giants winning two Super Bowl titles. He would later win three more rings as the defensive line coach with the New England Patriots from 1993-96 under the guidance of Bill Belichick.

Weaver gladly accepts the role from someone he considers a mentor.

“Not only is Romeo Crennel a tremendous defensive mind, but he is an incredible human being,” said Weaver. “He’s been a huge mentor for me throughout, and I can’t tell you how fortunate I feel just to still have him in the building and be able to bounce ideas off of him.”

Another person who shares those same sentiments about Crennel is three-time Defensive Player of the Year J.J. Watt.

“It’s great to have RAC (Crennel) around still,” said Watt. “I love RAC. We finished up a Zoom meeting recently, and at the end of it, he (Crennel) gave us his little words of advice and wisdom, and we were having some fun. He’s just such a great guy.”