TikTok is trying to remove a graphic suicide video 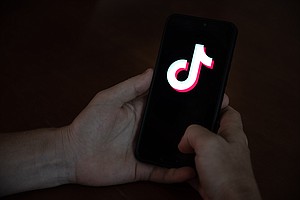 (CNN) -- TikTok is working to take down a graphic and disturbing video showing a man shooting himself with a gun.

The man originally livestreamed his suicide on Facebook late last month, but clips of the video have been shared in recent days to other social media platforms, including TikTok.

"Our systems have been automatically detecting and flagging these clips for violating our policies against content that displays, praises, glorifies, or promotes suicide," a TikTok spokesperson told CNN Business. "We are banning accounts that repeatedly try to upload clips."

Some TikTok users began cautioning others to swipe away from the video if they come across it, noting it featured a bearded man sitting at a desk.

Nineteen-year-old Grayson Haugland was scrolling through the TikTok "For You Page" on Sunday, when suddenly the video popped up. He said his reaction was "utter sadness and disgust" that someone would want to share the video.

"It's absolutely atrocious and gory [that] this was available to children who use the app [and] recommended to them by the TikTok algorithm," Haugland told CNN Business via Twitter direct message.

TikTok requires users to be 13 to sign up for the app. However, like with other social networks, the accuracy of birthdays is not enforced. TikTok also offers a limited version of its app for those under 13 with additional safety and privacy controls.

TikTok has taken steps to make it harder to search for content related to self-harm. When searching for "suicide video" or similar terms on the short-form video sharing platform, results are blocked and the app serves up the number of the National Suicide Prevention Lifeline, as well as tips and other support resources.

Facebook also said it is removing any reuploads of the video. "We removed the original video from Facebook last month on the day it was streamed and have used automation technology to remove copies and uploads since that time," Drew Pusateri, a Facebook spokesperson told CNN Business, adding that its "thoughts remain" with the victim's family and friends.