Houston Rockets GM Daryl Morey, who sparked controversy between the NBA and China, to step down 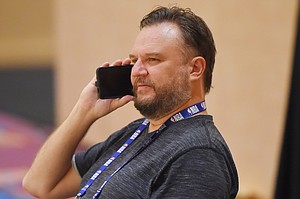 (CNN) -- Daryl Morey, who in October last year sparked controversy between the NBA and China with a tweet in support of pro-democracy protestors in Hong Kong, is stepping down as the Houston Rockets general manager.

Morey will leave his current role on November 1 after spending 14 years with the Rockets, helping his side reach the last eight consecutive playoffs.

Rockets owner Tilman J. Fertitta thanked Morey for his "hard work and dedication" in a statement on Thursday.

"Daryl is a brilliant innovator who helped the Rockets become a perennial contender," he said.

"I have truly enjoyed working with Daryl and couldn't have asked for a better general manager to have at the start of my ownership. I wish him and his family all the best."

In a statement on Thursday, Morey says he made the decision to step down after returning from the NBA bubble in Orlando, Florida.

Houston lost to the Los Angeles Lakers in the Western Conference semifinals this year after the sport returned from lockdown.

"After discussing my thoughts with family and close friends, I've decided I'll be stepping away from the Rockets organization effective November 1st," Morey said.

"Tilman and I have had many conversations since I returned, and his unwavering support and counsel during our time together has been critical to our success.

"It has been the most gratifying experience of my professional life to lead the Rockets basketball organization, and I look forward to working with Tilman and the management team on the transition.

"I am very confident that the future -- for the Rockets, and for our incredible fans -- is in great hands, and that the Rockets will continue to perform at the highest level."

Despite his success with the Rockets, Morey will likely be remembered for causing a diplomatic storm between China and the NBA.

His now-deleted tweet in support of pro-democracy protestors in Hong Kong gained international attention whilst tensions rose in the former British colony.

Several Chinese businesses cut ties with the Rockets as a result and the NBA came under severe pressure from Chinese authorities.

The league initially distanced itself from Morey's tweet, expressing regret for offending "friends and fans in China" but this led to further criticism that it was comprising its principles to further its financial interests.

NBA commissioner Adam Silver later came out in support of Morey in terms of his freedom of expression but fans in China still called for him to be fired.

Meanwhile, many in the US, including politicians, urged the NBA to stand its ground and uphold its moral values.

Chinese state-run television network CCTV stopped airing NBA games in the country as a result, which it said was over "strong dissatisfaction" over Silver's comment.

For the first time in more than a year, the hiatus ended last week, with CCTV airing Game 5 of the NBA Finals between the Los Angeles Lakers and the Miami Heat.

The NBA has invested millions in developing basketball in China where an estimated 300 million people now play the sport.