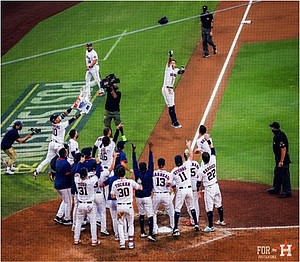 Stadium in San Diego, California as soon as I heard the loud “Crack” from the barrel of the bat of Astros shortstop and “Swag Leader” Carlos Correa.

I knew it was over.

Correa’s heroics helped the Astros live to fight another day as they defeated the Tampa Bay Rays for the second consecutive game in a row. Houston’s 4-3-win forces a Game 6 in the ALCS which some didn’t think would happen after they went down 3-0 in the series. Well everyone except the Astros players and fan base.

“This team’s pretty resilient, and we show that day in and day out,” said Astros closer Ryan Pressly who helped seal the victory by pitching 1 1/3 inning of scoreless baseball. “You push our backs against a wall, we’re gonna fight you. This team was built with a bunch of fighters, and I’m happy to be a part of it.”

Fighting is what Houston did from the start of the game. George Springer got the Astros on the board with a first pitch home run off of Rays starting pitcher John Curtiss. He is now tied with Albert Pujols for fourth place for the most postseason homeruns at 19 and it was his first career postseason leadoff home run.

Tampa responded with a solo-home run in the top of the third inning to tie the game at 1, but Houston would regain that lead with some great hitting and timely base running by catcher Martin Maldonado. Yes, you are reading this correctly. I did say “Maldy” as Astros manager Dusty Baker likes to call him.

After reaching base with a double to advance Josh Reddick who had hit a single in the at-bat before him to third base, Maldonado used his speed and agility to score from second base after Michael Brantley singled to right field to give the Astros a two-run lead.

Once again the Rays would respond with two solo home runs by Randy Arozarena and Ji-Man Choi in the fifth and eighth inning to tie the game at 3 and it seemed like the momentum had swung a little bit for the top seeded team in the American League who is trying to make their second World Series in franchise history. That was until the bottom of the ninth inning.

Just to reiterate how confident he was, Correa also made sure he let his first-year manager know his intentions.

"I mean, Carlos told me before he went up there, he goes, 'Walk-off.' I said, 'Go ahead on, man,'" Baker told the media after the game. 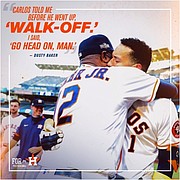 As his fearless shortstop made his way to the plate, Baker turned to some divine intervention to help Correa, just like he did the game prior when he left starting pitcher Zack Greinke in the game to get out of a bases loaded jam.

“I prayed to my dad and my brother and I said, ‘Lord please let us walk it off,’” said Baker. “Things couldn’t have worked out any better.”

His request must have gotten through because Correa sent a Nick Anderson pitch 416 feet over the center-field wall to end the game and give the Astros one more chance to advance to their third World Series in four years. 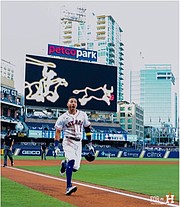 Belief is something that all the Astros have including their pitching staff. After the Astros got the victory in Game 4 to stave off elimination, Dusty Baker was left with a terrible dilemma. He really had no clue on who would start Game 5 for Houston. Looking over the stats of service time for his young staff, it did not look promising going up against a Tampa team who is loaded with hitters. Yet, he stilled believed in his rookies.

That belief led to rookies Luis Garcia, Blake Taylor, Enoli Paredes, Andre Scrubb, and Brooks Raley all getting their chances to help the Astros stay afloat. They did a tremendous job allowing only two runs on four hits in seven innings of work.

“All I know is that they’re fearless, and I’m so proud of them,” said veteran closer Ryan Pressly. “I can’t really explain how I’m feeling and how to describe how good and how composed they’ve kept themselves throughout this entire series.”

Composure is what the Astros had from start to finish as Springer and Correa became the only teammates to lead off the game with a home run and end it with one in the same playoff game. That led to a massive team celebration as Correa crossed home plate and him and his manager embraced each other exchanging words back and forth.

Correa could only express himself the best way he knew how too during the excitement. When asked what he told Baker during the hug he laughed.

“I f---ing told you,” he said referring back to the earlier conversation they had before he headed to the plate in the bottom of the ninth inning.