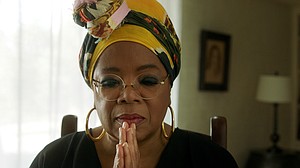 (CNN) -- Haunting and poetic, "Between the World and Me" translates Ta-Nehisi Coates' book and the subsequent stage presentation into an HBO special that loses none of its power, a feat made all the more remarkable by its production amid the coronavirus outbreak. Weaving in news footage with stars reading Coates' words, this version of the writer's reflections to his 15-year-old son will likely be played and replayed for years to come.

Directed by Kamilah Forbes -- who brought Coates' book to the Apollo Theater -- the special incorporates news footage old and new, from Muhammad Ali speaking to dash-cam video of police abusing African-American drivers. While Coates' book is the defining voice, the exceptions are notable, including Chadwick Boseman's commencement speech at Howard University, and Breonna Taylor's mother, in an audio clip, discussing how she learned of her daughter's death.

"I'm telling you this in your fifteenth year," the narrative begins, delivered by a who's who of Black celebrities, including Mahershala Ali, Angela Bassett, Joe Morton, Wendell Pierce, Yara Shahidi, Courtney B. Vance, Susan Kelechi Watson (also one of the producers) and Oprah Winfrey.

Coates speaks of the "cosmic injustice" of the Black experience, and tells his child, "You do not have the privilege of living in ignorance" -- a warning that possess additional clout with Oprah presenting it.

Connecting the past to the present, Coates talks about a Howard student he knew who was killed by the police -- drawing a line through the long and painful history that has built to the Black Lives Matter movement.

"The system makes your body breakable," Coates writes to his son, adding, "This is your country ... And you must find some way to live within the all of it."

Despite the limitations of shooting under Covid conditions, Forbes has brilliantly deployed the talent, sometimes simply showing their melancholy expressions while the voices of others play. Set to an affecting score by Jason Moran, the production approximates a theatrical experience, bringing the dialogue to life in a deeply intimate manner.

"Between the World and Me" was published in 2015, and a lot has happened since then. Reviewing the book in the New York Times, Michelle Alexander wrote, "Whether you agree or disagree, one of the great joys of reading Ta-Nehisi Coates is being challenged in ways you didn't expect or imagine."

The last five years have only made Coates' arguments more relevant, and this provocative special timelier -- issuing a call that says anyone who entertains the desire for progress no longer has the privilege of living in ignorance.