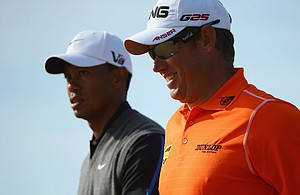 "However, we at the PGA Tour have a considerable amount of optimism and are committed to doing more, in Diversity and Inclusion."

The organization also indicated that it has plans to announce a substantial commitment to social and racial justice causes in the coming months.

The USGA did not immediately respond to CNN's request for comment.

Westwood singled out the cost of playing golf as a significant barrier to entry.

According to a 2018 survey by the Golf Channel, the median cost of an 18-hole round at a public golf course is $36 including cart, but excluding clubs.

Private golf clubs are particularly expensive. According to a study of private clubs carried out by Longitudes Group for Golf Digest, the most elite clubs demand an initiation fee of between $250,000 and $500,000.

Only 30% of responding private clubs had a list price of $7,500 or less. That is without annual "dues" (membership fees) which, according to the survey, cost an average of $6,245 (approximately $520 per month). Some clubs also require a minimum amount to be spent in the club shop and bar every month.

Meanwhile the Ryder Cup, has been postponed to 2021.

Organizers said that the decision to postpone this year's event was based on guidance from the Centers for Disease Control and Prevention.

"It became clear that as of today, our medical experts and the public authorities in Wisconsin could not give us certainty that conducting an event responsibly with thousands of spectators in September would be possible," said PGA of America CEO Seth Waugh in a statement.

"Given that uncertainty, we knew rescheduling was the right call."