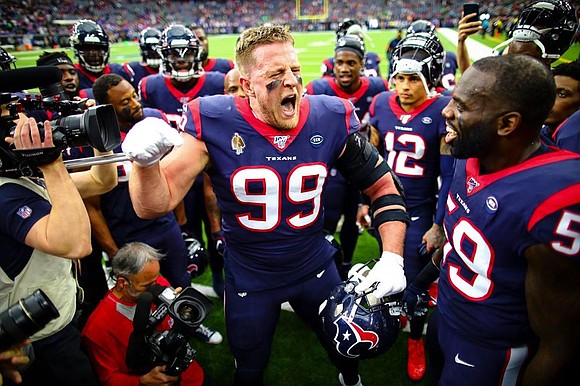 Most people can look back at any point in time and remember a significant event that has changed their lives. Whether it be the birth of a child or being the first in the family to graduate college. Events like that are what you look back on as you succeed in life.

For the Houston Texans that significant event was October 13, 2019, when they had their first signature win in the last three seasons by defeating 2020 Super Bowl contender and 2019 AFC Championship game participant, Kansas City Chiefs. Houston won by a score of 31-24 in Arrowhead Stadium as they would use that win to propel them to another seven victories and secure their second AFC South title in as many years.

Houston will head back to Arrowhead Stadium to take on the Chiefs in the AFC Divisional Round on Sunday looking to repeat what they did earlier in the season.

“I think since it happened this year, you have to watch the game and see relative to what you did in that game, what they did, and then, relative to what is going on right now with both teams,” said Texans head coach Bill O’ Brien. “I do think that both teams are different. I do think that over the course of a season, based on a lot of things, whether it's injuries or scheme or whatever, that things can change, but you definitely have to go back and look at that as a reference point.”

The Texans are coming off a huge playoff victory as they used a second half rally to defeat the Buffalo Bills in the AFC Wildcard game last Saturday by a score of 22-19 in overtime. After falling behind by a score of 16-0, Houston scored 22 points led by quarterback Deshaun Watson who threw a short pass to seldomly used running back Taiwan Jones in overtime for a 34-yard pickup after almost being sacked by two Bills defensive players. Texans kicker Kaimi Fairbairn booted a 28-yard field goal to cap off the largest comeback from behind victory in the Bill O’Brien era.

“It was finding that one spark,” Deshaun Watson said after the game. They had the momentum. Honestly, they gave their best shot that first half. “All we had to do was just kind of get back in that routine and find that rhythm. This is what the NFL is about, especially the playoffs.”

Now Houston must use that same momentum as they will face a Chiefs team looking to avenge their Week 6 loss at home to the Texans. For Houston to be successful they must stick to the ball control offense they used to rack up over 192 rushing yards. That mindset brought them back from a 17-3 deficit in that game as they used running back Carlos Hyde as much as they could. He would finish the game with 116 yards on 26 carries and one touchdown.

Chiefs head coach Andy Reid plans on having his team better prepared in this, “Win or go home” battle.

"I feel like we've played each other so much over the years, it's crazy,” Reid said. “I think they know us, and we know them. Heck, we didn't play very well in the first game. We've got to play better, so that's what we're going to try to do. That's what we're working on right now."