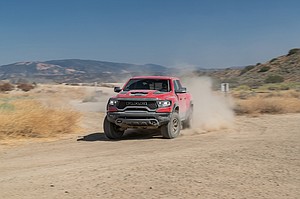 Besides the 1500 TRX's raw power and speed -- it is able to go from zero to 60 miles an hour in 4.1 seconds, making it the quickest pickup truck MotorTrend has ever tested -- judges also noted the truck's high level of interior quality and relatively refined on-road driving performance.

The TRX is really designed to excel off-road, though. With its big wheels and tires, the truck's body rides nearly a foot off the ground. That's two inches more ground clearance than the standard Ram 1500 all-wheel-drive truck.

The TRX's suspension system was specially engineered to handle harsh terrain at speeds of more than 100 miles per hour. The 1500 TRX includes a computerized "Jump Detection System," which recognizes when it has become airborne and automatically controls power from the engine so transmission and engine components aren't damaged as the truck slams back into the ground creating abrupt strain. The system also provides the best possible performance as the tires meet the ground again, according to Fiat Chrysler. Special air filtration systems protect the engine from the dust and dirt that's kicked up in off-road driving.

Even when towing a large camping trailer, the TRX still went from zero to 60 mph more quickly than some of the other trucks in the competition when they were towing nothing.

One of the criteria for the MotorTrend award is value. The TRX won despite a starting price of more than $70,000. The judges thought the truck's performance and features, plus the quality of its interior, which they compared to those in Audi and Mercedes-Benz cars, was worth the cost.

One problem, they noted, was the truck's fuel economy. The TRX gets an EPA-estimated 14 miles per gallon in highway driving and just 10 mpg in city driving.

With its big supercharged V8 engine, the Ram TRX considerably outpowers the Raptor, which has a 450-horsepower turbocharged V6. However, Ford recently started production of a redesigned version of the F-150 pickup on which the Raptor is based. A redesigned Raptor is expected to be revealed soon, as well.

Besides the TRX, the other finalists for this year's award were the Ford Super Duty, Jeep Gladiator, Nissan Frontier and Nissan Titan. The new F-150 was not included because it wasn't ready in time, a MotorTrend spokesman said.

The trucks were put through instrumented tests, with results measured by computer-connected monitors. Then MotorTrend staffers drove all the contenders and met to discuss their impressions and vote on the winner.

The vehicles were judged on six criteria: safety, efficiency, value, advancement in design, engineering excellence, and performance of the intended function, MotorTrend said.