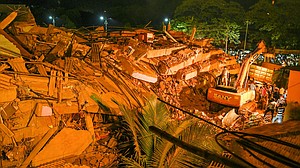 (CNN) -- The death toll from a five-story apartment building collapse in the Indian state of Maharashtra has risen to 12, as rescue operations to locate the missing were suspended overnight.

A four-year-old boy was rescued alive from the scene on Tuesday, according to Srivastava.

The building collapsed at about 6:30 p.m. on Monday. The third, fourth and fifth floors were all "completely collapsed," according to Srivastava, but officials are hopeful that air pockets in the parking lot and on the first floor have allowed people to survive.

Some 70 of the 97 residents managed to escape. Eight were rescued by the NDRF, of which one man later succumbed to a heart attack.

State and federal first responders used specially trained dogs to help dig through the remains of the structure, which is located in Raigad district's Mahad city, about 150 kilometers (93 miles) south of Mumbai.

The rescue operation will resume at daylight on Wednesday.

Residents told emergency workers that when they ran out of the building, the pillars in the parking lot were "still vibrating," meaning they could have withstood the collapse.

Srivastava said "it is possible that the first floor may be intact," but that responders "can't see it below the debris."

"We expect the people who are trapped to be on the first or second floor or in the parking of the building," Srivastava said. "We are going through the vents and are using the canines to check, they smell live victims so if someone is trapped in the debris it will indicate it to us."

An official with the local fire department, V.Y. Mote, said he expects the operation to take one more day.

The building was made up of 41 apartments, but 18 of them were not occupied, district official Nidhi Chaudhary told reporters. Local authorities have prepared a list of the building's residents and "have shared the details of the missing persons with those present at the scene of the collapse in case they are able to identify someone from among the injured," Chaudhary said.

Authorities initially feared that up to 60 people were trapped and 18 were injured, but have since revised those figures.

It's unclear what caused the building to collapse. August is monsoon season in India, when intense rains and floods wreak havoc on infrastructure, but authorities also appear to be investigating negligence. An initial police report has been filed against five people -- including the individual whose company built the building -- for culpable homicide not amounting to murder, but no arrests have been made.

Prime Minister Narendra Modi said on Twitter he was "saddened" by news of the collapse and that his "thoughts are with the families of those who lost their dear ones."

"I pray the injured recover soon. Local authorities and NDRF teams are at the site of the tragedy, providing all possible assistance," his office tweeted.

Following initial reports of the incident, the Twitter account for the office of Maharashtra's Chief Minister Uddhav Balasaheb Thackeray tweeted: "CM Uddhav Balasaheb Thackeray spoke to MLA @BharatGogawale and Collector Nidhi Chaudhary to inquire about the building collapse in Mahad. He has assured them that all possible support will be extended for speedy rescue & relief works."

India's home affairs minister, Amit Shah, tweeted: "The collapse of a building in Raigad, Maharashtra is very tragic. Have spoken to DG @NDRFHQ to provide all possible assistance, teams are on the way and will be assisting with the rescue operations as soon as possible. Praying for everyone's safety."