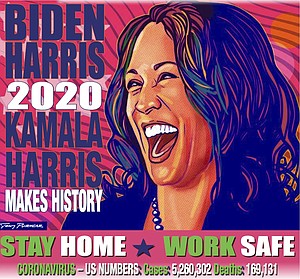 Kamala Harris walked into a packed auditorium for her freshman orientation at Howard University and experienced a revelation.

As she studied her classmates at the historically Black school in Washington, D.C., she saw a mini-rainbow coalition of faces from around the US, Africa, the Caribbean and other places -- many impossible to fit into a neat box because their racial and socioeconomic backgrounds were so varied.

"I stood in the back, looked around and thought, 'This is heaven!' Harris recounts in her biography, "The Truths We Hold: An American Journey." "There were hundreds of people, and everyone looked like me."

Presidential candidate Joe Biden's selection of Harris as his running mate could have a similar impact. Thousands of students at Howard and other historically Black colleges and universities -- known as HBCUs -- can now look at the 55-year-old Harris' ascension and say the same: She looks like me.

Harris' vice-presidential nod isn't just a political milestone for African Americans and South Asian Americans. Harris is the first HBCU grad selected for such an honor. And at a time when many HBCUs are struggling financially, seeing her in the White House would be a ringing vindication of Black college culture.

"It would be momentous to not just see a product of a HBCU but a Black woman in a very powerful position,'' says Jelani M. Favors, a historian and a graduate of North Carolina AT&T State University, another HBCU. "It would be a major sea change in the trajectory of these institutions."

A Vice President Harris could evoke some of the same joy in Black people that Barack Obama's election did in 2008, says Favors, author of "Shelter in a Time of Storm: How Black Colleges Fostered Generations of Leadership and Activism."

"If she becomes vice president," he says, "that would signal to America how Black colleges have played a role in shaping some of the most powerful people in this country."

I was one of Harris' classmates

Favors doesn't need to convince me. I was one of those freshman students at Howard that Harris described. She and I were in the same class and share some mutual friends.

Back then many Howard students wore a T-shirt that declared, "It's a Black thang, you wouldn't understand." It's hard to convey to outsiders what it's like to attend a Black college. It can be shocking as a young adult to walk into a space where Black people aren't preoccupied with what White folks think.

Some of the most brilliant people I've ever met were Howard students. They came from all over: Nigeria, Kenya, the Virgin Islands, inner-city Philly and sunny Southern California. It was an explosion of blackness.

Harris' multiracial, international background -- her mother is from India and her father is Jamaican -- fit right into Howard.

But Howard is part of a larger HBCU culture where Black lives have always mattered. It's a culture of colorful "step shows" where Black Greek groups perform complex, synchronized dance-like routines as crowds cheer them on. It's flamboyant, high-stepping marching bands battling one another at halftime of football games.

HBCUs are places where a Black person could go "without having your intellect or your humanity called into question," Favors wrote in his book. It's why Beyoncé, who pays homage to HBCUs in her documentary, "Homecoming," once said, "I always dreamed of going to an HBCU."

Harris once cited two primary reasons for why she is who she is today: "Because of my mother and the family I was raised in, and Howard University."

Her stature as vice president of the United States would enable her to promote the importance of HBCUs like no other, says Winston-Salem State University Chancellor Elwood Robinson.

"It would be a game-changer," he says. "It would change the perception that the masses have about HBCUs. It would introduce so many people to a world and experience that they did not know."

HBCUs' challenges in the age of Covid-19

HBCUs need any game-changer they can get. There are about 100 such schools around the country, and many have always struggled to survive. Most of them were formed after the Civil War to provide educational opportunities for newly freed slaves. They also enroll students of other races and ethnicities, including Whites, Latinos, Asians and Native Americans.

Some of those financial struggles are due to raw racism. Many states have consistently underfunded HBCUs. The landmark GI Bill, which allowed many World War II veterans access to college education, also helped fund White colleges to accommodate the influx of students. But much of that funding was denied to Black students and HBCUs.

HBCUs also struggle with building healthy endowments. Black college graduates have less accumulated wealth than whites, and HBCUs have not traditionally been able to attract large philanthropic gifts from non-alumni, partly because some donors assumed that they couldn't properly manage their money, some scholars say.

The Covid-19 pandemic is just the latest blow. The pandemic has taken a disproportionate toll on the health and finances of the Black community, and now HBCU leaders anticipate budget short falls because of plunging enrollment at many schools and warn of possible job losses.

One bright spot came recently when MacKenzie Scott, the author, philanthropist and ex-wife of Amazon CEO Jeff Bezos, gave large donations to six HBCUs including Howard, which received $40 million. Four of the HBCUs said it was the largest single donation in their history.

But Favors says Scott's gift also underscores the financial need at even the most prestigious HBCUs.

"It shows the wealth gap in America," says the history professor at Clayton State University in Georgia. "When you look at other public institutions, a $20 million gift would have never been the largest financial gift. Many institutions have received far greater than that."

Favors worries that the financial pressures on HBCUs could cause them to lose sight of their traditional mission of nurturing political leaders like Harris and others who fight for social justice. HBCUs provided the shock troops and the staging ground for the civil rights movement of the 1960s. Favors calls this activist tradition the "heartbeat" of HBCUs.

But that heartbeat is fading because of a change in priorities, he says. Many HBCUs are now emphasizing science, engineering and mathematics because those fields draw much-needed research funds. Favors says more school leaders are overlooking the social sciences departments, which trained students like King and Stokely Carmichael, another civil rights icon, to be political leaders and activists.

"As students shun academic fields that challenge them to reckon with the continued marginalization of the Black masses, the reservoir of Black radical thought grows shallower," Favors writes in his book.

But HBCUs have some trends in their favor as well. Racial tensions across the US in the era of President Trump have led to a surge in enrollment. Several HBCUs say they have recently experienced record increases in applications.

One report said Black students are returning to HBCUs because some have experienced racial harassment at white schools and because HBCUs "offered a safe haven from the racism and vitriol Trump's campaign brought out in many White Americans."

Those safe spaces are what HBCUs can offer that other schools can't, says Robinson, Winston-Salem's chancellor. Robinson, who is also a clinical psychologist, says one the most important issues for any college student is feeling like they belong on campus.

Black students don't have that issue at schools like his, he says.

"At HBCUs we think we got that down pat," he says. "When a student comes to Winston-Salem, we have this tag that, 'You can be the next' and you fill in the blanks. I want them thinking they can be anybody they choose to."

Seeing a HBCU graduate like Kamala Harris in the White House and on the international stage could be the ultimate fill-in-the-blank for any HBCU student.

Harris wouldn't be just a role model. She could be what she experienced at Howard almost 40 years ago when she first stepped on campus: