Pregaming with the Talkin’ Bout It Tailgaters 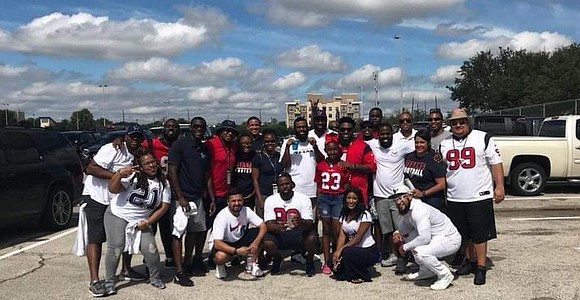 It’s the best time of the year for the majority of sports fans. It is the return of professional football and tailgating. Houston Texans fans have been ranked nationally as some of the best tailgaters. When fans hear the word tailgating the words food, drinks, and music come to mind. Stores are stocking up the chip and dip displays for the pregame partiers. However, don’t tell tailgaters they are just partying because there is more to it.

Ronnie Thomas, a long-time season ticket holder that is a member of the Talkin’ Bout It Tailgaters (TBT) will quickly remind you they are family. He says this tailgating “unique fun, family-oriented and friendly environment. Every visitor receives love like they are family. The people involved in creating the atmosphere and the spirit of the tailgate truly make a unique tailgate experience.”

TBT was officially started in 2006 with three guys and a small barbeque pit and grew to a dedicated crew of 25 members. The dedicated crew meets before the season so that an executive board consisting of seven can determine their logistics, finances and branding decisions.

Tailgate planning begins a month before the season. The process involves forming cooking teams that consist of three to five tailgate members, logistics, and cooking assignments. Ronnie oversees the newsletter that is distributed three days before the game for members to discuss “keys to the game” with a score prediction, gameday theme reminders, and any special announcements. The communications team collects input from the cook team and the bartender that develops the drink of the week. The tailgate drink centers on the Texans’ home game opponent.

Some of the past drinks include:

“TBT loves having guests, we encourage our tailgate member to invite guests at their leisure, but we like to inform the cook team ahead of time to have adequate food for everyone. The DJ keeps the music going, custom games that everyone can enjoy, beverages to quench a variety of thirsts and great food to soothe any appetite.”

Tailgating isn’t complete unless there are a few rituals and traditions. TBT has a few traditions such as every season during the winter TBT designates one game, “the gumbo game.” The gumbo game has gained the attention of other tailgaters and even the parking attendants. It includes a secret Louisiana recipe, including quail and a “special” smoked sausage driven in from Louisiana. Another ritual is the annual tailgate themed t-shirt with the official “Talkin’ Bout it Tailgaters” logo. The new goal for the year is to donate to a local after school programs for inner-city youth that focuses on math, science, and health initiatives. With the food, fun, and community involvement, it’s no wonder this crew has enjoyed Sunday fun for over a decade.

You can find this awesome group on the far west side of the yellow lot, so be sure to stop by and see what signature drink they have on the menu. If you miss TBT in the yellow lot before kickoff, then it’s probably close to game time, so follow the sounds of their original chant to the gates. Otherwise, you will have to wait for the next home game because this entire crew has season tickets.