Bye week comes just in time for the Texans to get healthy. 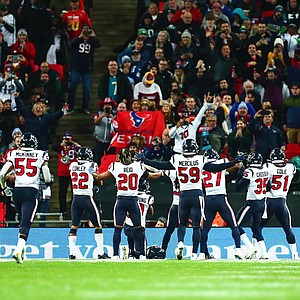 The Houston Texans sit atop of the AFC South with a 6-3 record after going “Across the Pond” to defeat their divisional foe in the Jacksonville Jaguars 26-3. Houston is on a bye this week and it comes at a time when they need it most with all the injuries they have on both sides of the ball.

“One of the keys to the second half of the season will be health,’ said head coach Bill O’Brien. “I think that guys have to work hard to get treatment this week and get away from the game a little bit, but to come back as healthy as they possibly can.”

The “Next Man Up” mentality has become the Texans mantra in the last couple of weeks, especially in the defensive backfield. With most of the starters either out or playing through pain, the Texans defensive unit has taken pride in their play and the coaching staff has taken notice as well.

“Romeo Crennel (Defensive Coordinator) is always harping on these guys about the next man up mentality, and we've been tested with that,” secondary coach Anthony Midget told the media on Monday. 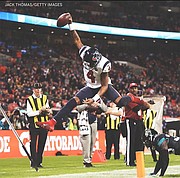 Most will look at the outstanding play of MVP candidate Deshaun Watson who is having a great year thus far (2,432 passing yards, 23 total touchdowns, 5 interceptions), but two off season trade acquisitions have stepped up to help propel the Texans to the top.

Wide receiver Kenny Stills has made the most of his time on the field since coming to the Texans along with offensive lineman Laremy Tunsil via trade with the Miami Dolphins. Stills has filled in quite nicely as Watson’s downfield threat with Will Fuller out due to a hamstring injury. He currently leads the team with 16.7 yards a reception so far this year and with Watson’s increased use of his tight ends the last three games, the field is wide open for the seven-year veteran.

Playing on his sixth team in six years, I think running back Carlos Hyde has finally found a permanent home in Houston. Hyde was acquired from the Kansas City Chiefs in a trade this summer to join Duke Johnson in the backfield after Texans starting running back Lamar Miller was lost for the season in the preseason.

Hyde leads the team in rushing with 704 yards and his 160 this past weekend against the Jags help propel them to victory. He is second on the team behind wide receiver DeAndre Hopkins in first downs gained at 37 and leads the team with runs over ten yards with 20.

Houston will definitely rely on him coming out of the bye week as they have three tough games against teams who all made the playoffs last year in the Baltimore Ravens, Indianapolis Colts, and Super Bowl Champs, New England Patriots.