'Aladdin' works its magic at the box office 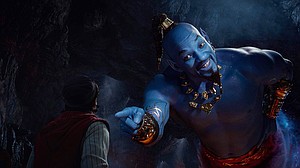 The live action reboot of the hit 1992 animated film brought in an estimated $112.7 million at the North American box office over the four day weekend, according to estimates from Box Office Mojo.

That's more than the studio's projected $75 million to $85 million and makes it the fifth-highest Memorial Day weekend total ever.

Disney holds the record for the most box office receipts for the holiday, with 2007's "Pirates of the Caribbean: At World's End," which scared up $139 million.

"Aladdin" took a magic carpet ride to the head of the box office despite concern back in February when the trailer featuring Will Smith as "Genie" had some worried that the film wouldn't do justice to the beloved animated original.

"John Wick: Chapter 3," in its second weekend finished in second place with $31 million.