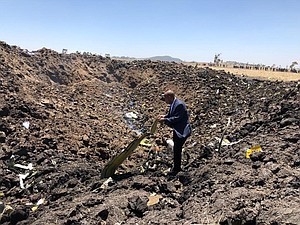 The Nairobi, Kenya-bound plane went down within minutes of taking off from Addis Ababa.

The crash killed 157 people, seven of them crew members and one a security official, an airline spokeswoman said. The passengers were from 35 nations, the airline said, with the greatest share from Kenya.

Nineteen United Nations staff members were among those killed, the UN said.

The staffers worked for the World Food Programme, the Office of the High Commissioner on Refugees, the International Telecommunications Union, the Food and Agriculture Organization, International Organization for Migration in South Sudan, World Bank and UN Assistance Mission in Somalia, and the UN Office in Nairobi.

Though it's not clear why UN employees were on the plane, the UN Environment Assembly was scheduled to begin Monday in Nairobi.

Here's what we know about the names and nationalities of the passengers and the security official. The airline has not yet reported the crew members' home countries.

Cedric Asiavugwa was a third-year student at Georgetown Law and a member of Georgetown University's Campus Ministry, the school said. Born and raised in Mombasa, he was on his way home to Nairobi after the death of his fiancée's mother, according to the school.

"It is with immense shock and grief to inform you of the tragic news that Tamarind CEO, Jonathan Seex, was on the ill-fated Ethiopian Airlines flight. Our thoughts and prayers are with his family, friends, the Tamarind community and all the others who have suffered unfathomable losses," the post read.

Nigerian-born scholar and author Pius Adesanmi was the director of Carleton University's Institute of African Studies. The Ottawa university said he was among the 18 Canadians killed in the crash.

"Pius Adesanmi was a towering figure in African and post-colonial scholarship and his sudden loss is a tragedy," said Benoit-Antoine Bacon, president and vice-chancellor.

Six members of the same Ontario family perished, according to CNN affiliate CTV. Kosha Vaidya, her husband Prerit Dixit, their teenage daughters Ashka and Anushka, and her parents Pannagesh and Hansini Vaidya were traveling to Nairobi. Kosha was born in Kenya and wanted to show her daughters where she came from, CTV reported. The family also planned to go on safari.

Jessica Hyba was among three UN High Commissioner for Refugees staff identified among the victims, according to a statement released by UNHCR chief Filippo Grandi.

China's Ministry of Foreign Affairs said that four of the victims worked for Chinese companies and two for the UN (including one Hong Kong resident). It said the two others were traveling for private purposes and were from Liaoning and Zhejiang.