The Band Of The Hawk Featuring Sage Majesty Drops A Fresh New Single, "F. A. M." In Anticipation Of Their Forthcoming Album 'Family Ties' 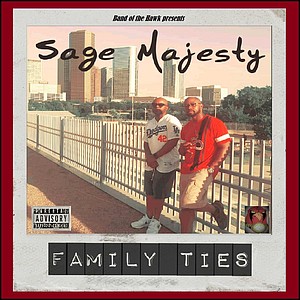 Houston's own The Band of the Hawk known for channeling the '90s Hip-Hop era in it's rawest form recently dropped "F. A. M. (Fine Ass Momma)" featuring Sage Majesty in anticipation of the forthcoming release, Family Ties. The hit single pays homage to a Comedy movie classic 'Friday After Next' while their single artwork is from the original 'Friday'-Hey, Mrs. Parker! The track is pulled from the forthcoming album, Family Ties, and is a raw Boom Bap or Lofi Hip-Hop song showcasing lyrics from two cousins representing the collective #BOHUP (P.Ey3 & Yeaux Majesty) produced by the leader of The Hawks, Noah Archangel.

"Look to sky and see the hawks fly..." Their lyrics are technical as they spit bars on top of a classic bass drum and snare keeping cadence. It's poetry, it's hip-hop. This track is laid back like rolling in an old school in a slab line. "We came up through some hard times..." It's about being great, not letting your past influence your present even though you have to know where you've been in order to know where you going- it's positive.

The album Family Ties is slated to be released Friday, March 15, 2019 during South By South West (SXSW) in Austin, TX. The guys are also planning to before during South By and shortly thereafter preparing for their Regional Summer Tour 2019 as a follow-up to the album. Be sure to stay tuned to everything The Band of the Hawk. 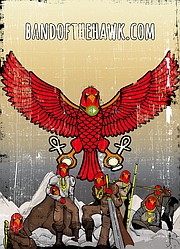 Who is The Band of the Hawk?

They're a mercenary company known as 'DEF on the battlefield,' are a 'spacious affair' all looped menace and blunted minutiae. Not unlike early RZA productions, if he had been raised in Houston’s Fifth Ward worshipping 90’s hood flicks more than kung fu cinema and stuck in a Mario Brothers maze. These early efforts have since been re-absorbed, shoving way towards the Hawks’ penchants for texture over bombast and interpretation over definition. The current line-up of the Hawks include: Noah Archangel, King aka Yeaux Majesty, Ash Ra aka Houey Freeman, P.Ey3, Spear Chuka and Whoa Vada – succeeds in meeting the audience’s current expectation from a hip-hop group. Each personality is equally present and distinguishable from track to track, regardless of preferred artistic attack. Whether Noah raps or produces, or King spits coolness on the mic first or last, listeners know the unmistakable gumbo that is The Band of the Hawk.

Get connected on social media: