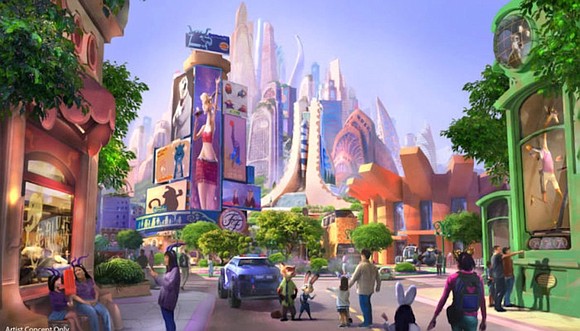 Hardcore fans of Disney's 2016 animated buddy cop comedy "Zootopia" are going to have to pencil China into their upcoming travel plans.

(CNN) -- Hardcore fans of Disney's 2016 animated buddy cop comedy "Zootopia" are going to have to pencil China into their upcoming travel plans.

Shanghai Disney Resort has just announced plans for a "Zootopia"-themed land, the first at any Disney park.

Though details are thin at this stage, in a statement Disney said construction is due to begin later this year. No word on an opening date, though.

"Guests will be invited to experience the mammalian metropolis of Zootopia 'where anyone can be anything,' with a new major attraction that will seamlessly blend Disney storytelling and state-of-the-art technology to bring this fan-favorite movie and its characters to life -- including Judy Hopps and Nick Wilde," says Disney's Zootopia announcement.

"Entertainment, merchandise, and food and beverage offerings will invite guests to fully immerse themselves in the Academy-Award-winning animated movie."

Disney's choice of Shanghai for the new land shouldn't come as a surprise. "Zootopia" was a huge success in China, breaking box office records to become the country's No. 1 animated feature film in history.

The Zootopia addition will become the theme park's eighth land and is the second major expansion since Shanghai Disney Resort opened in 2016 (check out CNN's coverage of the opening in the above video). Disney·Pixar Toy Story Land opened last year.

Like its five counterparts in Anaheim, Orlando, Tokyo, Paris and Hong Kong, Shanghai Disneyland is sectioned into themed areas.

"The rapid rate of expansion at Shanghai Disney Resort demonstrates our confidence and commitment to the company's future development in China," said Bob Chapek, Disney's chairman of parks, experiences and consumer products, in a statement.