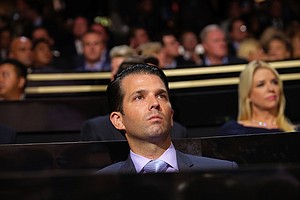 (CNN) -- President Donald Trump's eldest son made light over the weekend of the US government's history of genocide against Native Americans as part of a slam against Sen. Elizabeth Warren and her claims of American Indian heritage.

The offensive remark, largely characteristic of the 41-year-old's pugnacious and near-constant social media presence, is another in a series by the President and his son to engage in racism to smear the Massachusetts Democrat.

Donald Trump Jr.'s comment on social media was in response to a tweet from the President, who on Saturday attacked Warren and emphasized the word "trail" in a tweet widely construed to be a mocking reference to the Trail of Tears, the forced relocation of thousands of Native Americans which led to thousands of deaths.

"Today Elizabeth Warren, sometimes referred to by me as Pocahontas, joined the race for President. Will she run as our first Native American presidential candidate, or has she decided that after 32 years, this is not playing so well anymore? See you on the campaign TRAIL, Liz!" the President tweeted on Saturday. CNN has reached out to the White House seeking additional comment on the tweet.

Donald Trump Jr. later posted a screenshot of his father's tweet on Instagram along with a reply by another user that said, "The Native American genocide continues with another murder by the president."

New Mexico Democratic Rep. Deb Haaland, one of the first Native American women in Congress, said on CNN's "At This Hour" with Kate Bolduan that she took Trump's remark to be about the Trail of Tears.

Trump has dubbed Warren "Pocahontas" over her claims of Native American ancestry. For her part, Warren sought to address the controversy again last year when she took a DNA test. She apologized recently for her handling of the issue and acknowledged she is not a person of color or member of a tribe as she mounts a bid to take on Trump in 2020.

Additionally, Trump has referenced President Andrew Jackson repeatedly and has a portrait of Jackson in the Oval Office. In 1830, Jackson signed the Indian Removal Act, which led to the brutal, forced removal of Cherokees from Georgia to present-day Oklahoma. Trump held an event in November 2017 honoring Navajo veterans in front of the Jackson portrait, and at the same event he referenced his recurring "Pocahontas" attack on Warren. The National Congress of American Indians has condemned Trump's "Pocahontas" moniker.