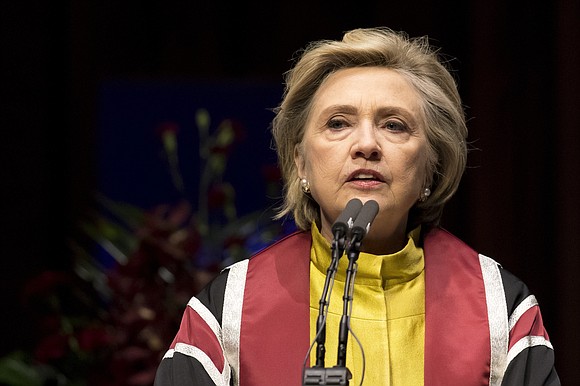 (CNN) -- On Sunday, after announcing for president, Minnesota Sen. Amy Klobuchar took questions from reporters about her 2020 plans. She was asked about her travel plans for the early days of the campaign, and said this:

If you don't get the reference, it's to this: Hillary Clinton lost Wisconsin to Donald Trump in 2016, the first Democrat to lose the Badger State since 1984. Clinton believed the state was in the bag, and didn't campaign there during the general election race. Not once.

As Clinton explained in her campaign memoir "What Happened":

"If there's one place where we were caught by surprise, it was Wisconsin. Polls showed us comfortably ahead, right up until the end. They also looked good for the Democrat running for Senate, Russ Feingold. We had 133 staff on the ground and spent nearly $3 million on TV, but if our data (or anyone else's) had shown we were in danger, of course we would have invested even more," she writes. "I would have torn up my schedule, which was designed based on the best information we had, and camped out there."

The failure to visit Wisconsin became, for many Democrats, symbolic of the fatal flaw of Clinton's campaign: She simply took the industrial Midwest for granted -- and watched as Trump won Wisconsin, Michigan, Ohio and Pennsylvania, and with those states, the White House.

While a few voices have emerged since Clinton's stunning loss questioning her campaign's strategy in the Midwest, most Democratic politicians -- particularly those with an eye on being the party's 2020 presidential nominee -- have avoided directly criticizing the way the former secretary of state ran her campaign. That reticence is usually explained in two ways: 1) Talking about what Democrats did wrong in the past isn't any way to solve beating Donald Trump in the future and 2) Clinton -- and her husband -- remain major figures within the Democratic Party, and crossing them isn't a very good idea.

Which is what makes Klobuchar's purposeful calling out of Clinton and the campaign she ran all the more intriguing.

In case you think -- and I know there are some of you out there! -- that Klobuchar didn't really mean to send a signal that she was a clear break from the Clinton way of doing things, consider that Wisconsin's presidential primary is currently set for April 7, 2020. That's more than two months after the first votes are expected to be cast in Iowa. So, there's no real reason to go there this early, except as a symbolic way to demonstrate that Klobuchar won't take the Midwest for granted -- as she is clearly implying Clinton did.