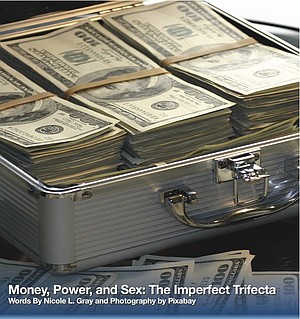 To be clear: money, power, and sex have been longtime bedfellows. No matter where you look, on the blocks, in churches, schools, boardrooms, politics, Hollywood, the music industry, you name it and you will likely see them together. From the pimp on the street corner using his money and power to both dominate and dazzle ‘his’ women to the president admitting that powerful men can walk up to women and do whatever they want, in almost every aspect of life, you can find scenarios that validate the fact.

So, when women began to come forward by the hundreds in the wake of the #MeToo movement, although the numbers and some of the profiles (celebrities, doctors, politicians, CEOs) were staggering, the fact that someone used their money and/or power to sexually exploit another was no surprise. In fact, the federal government has recognized a cause of action for workplace sexual harassment since the 1970s, as victims argued the harassment was a violation of their civil rights and thus actionable under Title VII of the Civil Rights Act of 1964. So, again, although the numbers of victims who have come forward since the movements started in 2017 are alarming, the acts are no shock.

It was also no shock that for just as many supporters of the #MeToo movement, there were detractors. Many of the detractors offered misinterpreted courtships and typical “she was asking for it” arguments to justify that which has been normalized in our society. This is not to be too down on those who do not support the #MeToo movement, because although sexual harassment, assault, and other improprieties are reprehensible, what is lost most times in their twisted arguments is the fact that sex has been widely used in the reverse to gain access to money and power.

Take Cleopatra, the ancient Egyptian ruler and renowned temptress who used her sex appeal as a political weapon; Li Yang, the Florida entrepreneur from China with powerful connections to several GOP notables including Florida Gov. Ron DeSantis and President Trump who gained national attention after the arrest of New England Patriots’ owner Bob Kraft for soliciting prostitution at a massage parlor she once owned; or the infamous ‘groupie’ who exchanges sex for a temporary lavish living. Essentially, sexual exploitation goes both ways. So, beneath the flawed reasoning of many who oppose the movement lies this alternate fact.

But irrespective of ‘who’s ‘zoomin’ who,’ you would think all bets would be off when it comes to children. One would think, as a society, we would ‘pull out all of the stops’ to protect our children from such exploitation. Sadly, that’s not the case. Instead, there is an invisible infrastructure supported by a societal blind-eye and silence that perpetuates this grotesque behavior. So, as disturbing as the details are, which are steadily developing following the apparent suicide death of Jeffery Epstein in a Manhattan jail earlier this week, there is no shock that the rich and arguably powerful man used his money and influence to sexually exploit children.

Epstein was a wealthy financier and convicted sex offender with a high-profile social circle. At the time of his death, he was being held without bond on federal charges in New York, accused of operating a sex-trafficking ring involving dozens of victims, some as young as 14. In 2008, facing similar allegations, Epstein pled guilty to two lesser prostitution-related charges and served 13 months of an 18-month prison sentence in a Palm Beach County jail. There he was granted work release where he was allowed to leave the jail for 12 hours a day, 6 days a week. The 2008 plea deal surfaced following Epstein’s most recent arrest and was heavily criticized for its leniency and favor toward the offender. The deal led to the resignation of President Trump’s labor secretary, R. Alexander Acosta, last month, amid growing questions about his handling of Epstein’s case when he was a federal prosecutor in Florida. The FBI is currently investigating Epstein’s death as conspiracy theories swirl, from everything to the event being staged to that floated by our own president involving the Clintons and some kind of murder for hire theory.

Despite the gory details of his life and death, Epstein remains notorious, garnering headlines even this week of “Jeffrey Epstein, explained” and “Jeffery Epstein’s world of wealthy and powerful friends.” Everyone is intrigued by Epstein’s story and media outlets are finding no trouble feeding the public’s fascination with the life of an alleged child predator who lived a life of affluence and influence. R. Kelly is another example of this phenomenon.

Kelly is currently being held without bond in a federal correctional facility on two separate federal grand jury indictments in Illinois and New York. In both cases, Kelly is being accused of preying upon “young women and teenagers whose dreams of meeting a superstar, soon turned into a nightmare of rape, child pornography, and forced labor.” In 2002, R. Kelly was charged with 21 counts of making child pornography in Illinois. While awaiting trial in Illinois, Kelly was charged with 12 counts of making child pornography in Florida in 2003. Subsequently, he was acquitted of all of the Illinois charges while the Florida charges were dropped due to a procedural issue. As Kelly sits in jail awaiting trial his story has too made headlines, just earlier this month it was reported, “R. Kelly's Lawyer Says He Couldn't Find Client Ahead of Court Appearance” and “R. Kelly Calls His Alleged Victims 'Disgruntled Groupies' In Legal Docs.”’

Kelly’s and Epstein’s cases are amongst the most notorious, but unfortunately, aren’t isolated incidents. Their cases provide the perfect examples of how the invisible infrastructure has supported decades of child sexual abuse, right out in the open. The first brick of the infrastructure, which supports this type of behavior is normally laid by people who are supposed to protect children, not harm them. Families, churches and schools routinely cover-up child sexual abuse rather than risking reputational injuries to their names or organizations. Child protective services are largely inadequate, and the criminal justice system often hands out slaps on the wrists for sexual assaults of any kind. So, when children find themselves in the midst of this trifecta and attempt to get out, many times they feel out-numbered or over-powered. But, can you blame them?

While R. Kelly awaited trial for his 2002 Illinois child pornography case, he released his sixth album which went double-platinum, won a BET award for best male R&B artist, won 4 Billboard Awards and was nominated for an NAACP Image Award. While each of these men remained accused, and in Epstein’s case convicted, their affluence and influence remained, if not increased.

So, in this world where money, power, and sex permeate our existence, we must begin to deconstruct the infrastructure, which allows sexual predators to prey on children. Because as is the children victims are out-powered.