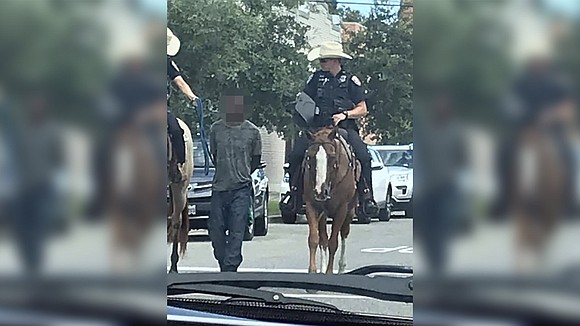 The police department has 30 days to comply, or face a civil rights march through the city, Crump said at a press conference Monday.

Two Galveston police arrested Donald Neely earlier this month. Photos show them on horseback, leading the 43-year-old by what appeared to be a rope. Neely was on foot.

Police said the officer was holding a "line" that was clipped to the man's handcuffs, not a rope. But the photo evoked images of slave hunters dragging captured slaves, Crump said, and "everybody who you talk to in communities of color were heartbroken."

"Until you release that video from that body cam, we are not going anywhere," Crump said. "We're going to stay here and stand with Donald Neely and his family."

If the video isn't released in 30 days, other civil, human and mental health advocates will join them to "have a great march on Galveston, and we're going to march down the same streets that you dragged Donald Neely down by rope," Crump said.

Police said Neely was charged with criminal trespass. Officers had warned him on previous occasions to stay away from a location in the downtown visitor district where he was arrested, police spokesman Sgt. Xavier Hancock said last week.

Neely family attorney Melissa Morris said last week that Neely suffers from bipolar disorder and is not taking medication to treat it. He had been homeless for about seven years, she said. Crump said police knew Neely suffered from a mental illness.

"The way they drug my brother down the street just really tore my heart," Neely's sister, Taranette Neely, said at Monday's press conference. "I mean, I was just in shock. And I'm still in shock. I can't believe that they would do this to my brother. The sweetest person on this earth."

Speaking to CNN's Don Lemon Monday night, Taranette Neely said her brother is loving and was always there for the family.

"He's sweet as gold. He'll give you his last," she said of her brother. "He has no problem with sharing, loving, or just being there for you."

She said she wants the police officers involved arrested and wants the department's handling of those with mental illness to change.

The department last week said it understands "the negative perception of this action" and that it will stop using the transportation technique.

"My officers did not have any malicious intent at the time of the arrest, but we have immediately changed the policy to prevent the use of this technique and will review all mounted training and procedures for more appropriate methods," Chief Hale said in a statement.

Only seeing the video would offer assurance that the police were of good character, Crump said Monday.

"Chief Hale, we're asking you to release the body camera recordings of these officers immediately, and start to heal this community, and in many ways, start to heal America," Crump said.

CNN has reached out to the Galveston Police Department for comment.