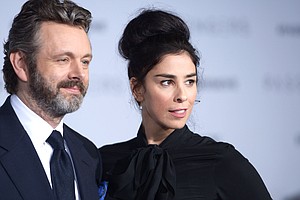 (CNN) -- Comedian Sarah Silverman has said she was once fired from a movie after producers found a sketch from 2007 in which she wore blackface make-up.

In an episode of her former Comedy Central show "The Sarah Silverman Program" that she has said she no longer stands by, Silverman's character dons dark face paint to see whether it is more difficult to be black or Jewish.

The episode, which was intended to examine racism from the point of view of Silverman's eponymous character, features the comedian saying: "I look like the beautiful Queen Latifah," and telling the congregation at an African-American church: "I'm black today."

Speaking to the The Bill Simmons Podcast last week, Silverman revealed: "I recently was going to do a movie ... a really sweet part and a cool little movie."

"Then at 11 p.m. the night before, they fired me because they saw that picture of me in blackface from that episode," she added. "So they hired someone else who's wonderful but who's never stuck her neck out."

Silverman said she "didn't fight it," but added: "It was so disheartening, it just made me real, real sad because I've kind of devoted my life to making it right."

The comedian, whose shows and stand-up routines are well-known for their provocative material, has previously said she is no longer proud of the episode.

"I don't stand by the blackface sketch," she told GQ last year. "I'm horrified by it, and I can't erase it. I can only be changed by it and move on."

She added: "That was such liberal-bubble stuff, where I actually thought it was dealing with racism by using racism. I don't get joy in that anymore. It makes me feel yucky."

And Silverman explained on The Bill Simmons Podcast that "there was so much I didn't know" while she was making her show. "I knew there was racism, I knew that there was and I wanted to illuminate that in some way in comedy. But I didn't know that cops were killing black people and unarmed black teenagers on the regular, and that changed me forever."

Silverman, an outspoken supporter of Democratic presidential nominee Bernie Sanders and a frequent critic of President Donald Trump, nonetheless argued against "cancel culture" during the podcast.

"On my show, the Sarah Silverman Program, which I love, there's so much problematic from that show. I mean it's brutal," she said.

Silverman is one of many entertainment figures who have been forced to respond to controversies after old tweets and social media posts resurfaced.

Last year, she reacted to criticism over a 2009 tweet by saying it was "from a time not that long ago when hard absurd jokes by comedians were acknowledged for what they were — jokes — not a disingenuous national threat to people fake-clutching their pearls."