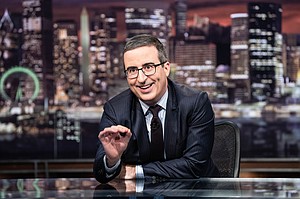 (CNN) -- John Oliver was not impressed by President Donald Trump's response to the recent mass shootings.

The host of HBO's "Last Week Tonight" dedicated much of Sunday's show to Trump's visits to El Paso, Texas, and Dayton, Ohio, in the wake of last weekend's mass shootings there. (HBO and CNN share parent company WarnerMedia.)

Oliver cited Trump boasting about the crowds who greeted him and putting his thumb up in a photo with an infant orphaned in the shootings as symbolic of the President's "pathological lack of empathy."

"Just consider the thought process that happened there," Oliver added. "He visited a hospital filled with victims of a mass shooting and thought to himself, 'Remember that other time when I was the center of attention and it was better?' And then he thought, 'Do you think anyone else remembers that?' Then he thought, 'I should remind them, right?' Then he thought, 'Great idea!'"

He reminded the audience that Trump's unusual behavior should not distract Americans from fighting for stricter gun laws.

"What action, if any, will be taken on guns?" he asked.

"While you're kind of conditioned at this point to think, 'Absolutely none.' Pressure is building," Oliver said, showing a crowd screaming, "Do something!" at Republican Gov. Mike DeWine at a vigil following the Dayton shooting.

"It all started last year, when federal investigators started looking into whether a Russian agent [Maria Butina] had used the NRA to infiltrate Republican policies -- which is already comfortably bad enough. But then, the New York state attorney general started looking into the their tax-exempt status because the NRA is technically a nonprofit, and it turns out there's been some very suspicious expenditures," the comedian explained.

He continued: "Obviously, the death of NRATV is a tragedy -- thoughts and prayers to all those affected -- but the bottom line is, for the first time in a while, things are not actually looking great for the NRA, so does this mean that gun control could finally happen? Mitch McConnell has hinted at action on background checks, but he's also refused to recall the Senate and might be hoping that by the time it's back in session, the pressure will be off."

"Meanwhile, the president has said that he's willing to stand up to the NRA, but he's also one, a liar; and two, likely to identify with an organization that has spent itself into colossal debt, has troubling ties to Russia, and is associated with s*ty TV programs and very bad taste."