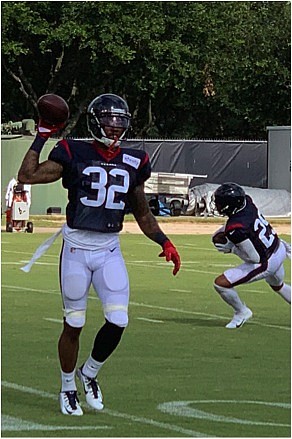 Green Bay, Wis.- One thing you can say about the residents of Green Bay is they love them some football. 72,928 fans turned out to watch the Houston Texans and Green Bay Packers play their first 2019 preseason game at Lambeau Field. Green Bay defeated Houston by a score of 28 -26.

The majority of the starters did not play last night which gave the second unit and undrafted players a chance to show the coaching staff what they could do. Here are some things I took away from the game.

Texans backup quarterback Joe Webb was forced into the most action he has seen since his first start back in December 2010 with the Minnesota Vikings. With starter Deshaun Watson sitting out and A.J. McCarron on injured reserve, Webb passed for 286 yards, one touchdown, and two interceptions, but you could tell he had not had any significant work with a lot of the offense and it showed.

“Go back to practice and get better. Go back and watch the film,” Webb said when asked about the main thing he needs to work on. “You’ll most definitely know when you watch the film, get aggressive on your coaching, and you’ll know exactly what you need to improve on.”

One thing that will make Texans head coach Bill O’Brien turn red in the face is to watch his team turn the ball over. Houston had a combined four turnovers last night (three in the first quarter) with two on interceptions by Webb, a muffed punt by WR KeKe Coutee, and a strip fumble on backup RB Taiwan Jones. The Texans must do a better job of protecting the ball going into next week’s game against the Detroit Lions. That will be a key emphasis in practice on Saturday.

“Obviously, we have to take care of the ball better, some decisions could’ve been better, a few of them led to touchdowns. But we’ll clean that up and we’ll get back after that,” O’Brien added.

I guess Inside Linebacker Dylan Cole felt all the nostalgia and mystique inside of Lambeau Field during the game. The third-year veteran out of Missouri State was all over the field making plays against the Packers including some key stops on their running backs. Cole’s keen awareness also helped contain Green Bay’s backup quarterback, DeShone Kizer from getting outside the pocket.

“Dylan Cole has had a good camp,” coach O’Brien reiterated at the podium after the game. “He is one of the guys who care about the team. He is a good teammate.”

Running back competition heating up

The news of the Texans acquiring former Cleveland Browns running back Duke Johnson earlier in the day must have only added fuel to the fire for the backup position to Lamar Miller. Houston traded a conditional 2020 fourth-round draft pick to the Browns that could become a third-round pick if Johnson is active for 10 games.

Taiwan Jones started the game for the Texans and had a great first quarter run hampered by a strip fumble by Packers safety Raven Greene. He was replaced by undrafted rookie Damarea Crockett who scored his first NFL touchdown on a one-yard touchdown that seen him temporarily stopped in the backfield before a strong second surge got him across the line. Karan Higdon Jr. would lead all Texans running backs with 37 yards and Josh Ferguson added a late fourth-quarter touchdown.

Houston will be back on the practice field in front of the fans on Saturday.

TE Jerell Adams had a game-high three receptions and one touchdown. He displayed a huge catch radius that helped QB Joe Webb when he was under pressure.

WR KeKe Coutee went down with an injury in the second quarter.