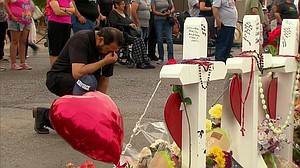 The deadly massacres over the weekend have sent Senate Republicans searching to find a robust response to help prevent future mass shootings amid loud demands that they quickly pass tougher gun control measures sought by Democrats.

On a private conference call Monday, Senate Majority Leader Mitch McConnell discussed the steps ahead with three committee chairmen and Sen. John Cornyn, whose state of Texas was home to one of the shootings from the weekend.

What was not considered during the roughly 15-minute call: Bringing the Senate back to session during the August recess and moving on the House-passed universal background checks bill as Democrats have demanded, according to sources familiar with the private call.

Instead, McConnell urged Cornyn and the committee chairmen -- Senate Health Chairman Lamar Alexander of Tennessee, Senate Judiciary Chairman Lindsey Graham of South Carolina and Senate Commerce Chairman Roger Wicker of Mississippi -- to look into whether new legislation is warranted that would meet the goals laid out in President Donald Trump's Monday remarks and that could win bipartisan support.

According to the sources familiar with the discussions, Alexander plans to look into whether any new remedies are needed in ensuring those with severe mental health issues don't have access to guns. Wicker will review whether any new legislation is needed in overseeing the content of violent video games, the sources said. Graham wants to advance so-called red flag legislation to empower localities to deny individuals access to guns if they pose a threat. Other legislative proposals could come out of these discussions as well, the sources said.

No specific time frame was laid out and the discussions are only in their nascent stages. But the goal was to find ways to advance legislation in the fall session when Congress returns from recess, the sources said. Over the recess, GOP senators and staff are expected to engage in discussions with Trump administration officials about what else could be done legislatively that could garner support from the White House.

In addition, Republican Sen. Pat Toomey of Pennsylvania has also made efforts to revive a long-stalled background checks bill he authored with West Virginia Democratic Sen. Joe Manchin, but that measure is narrower than the House bill since it only deals with commercial gun sales and also failed in 2013 following the 2012 Sandy Hook massacre.

"The President showed a willingness to work with us on the issue of strengthening background checks," the two senators said in a statement Monday.

It's uncertain how involved Democrats will be in trying to push these matters forward. House Speaker Nancy Pelosi and Senate Minority Leader Chuck Schumer both have said that other legislative proposals can be considered down the road but they are first demanding the Senate hold a vote on the sweeping background checks bill that passed the House earlier this year.

McConnell has no interest in moving the background checks bill since it lacks both Trump's support and the backing of most Senate Republicans, sources told CNN.

In a statement Monday evening, McConnell said he asked the committee chairs to "reflect" on the topics Trump outlined in his address to the nation and to engage in bipartisan talks to see what legislation can be enacted.

And he rebuked Democrats who have been demanding he bring the Senate back to session to quickly pass the background checks bill, saying: "Partisan theatrics and campaign-trail rhetoric will only take us farther away from the progress all Americans deserve."

McConnell's spokesman declined to comment on the Monday call beyond the statement the leader issued.