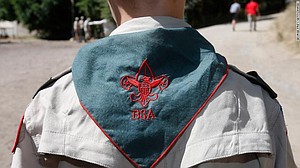 The Boy Scouts of America on Tuesday said it has referred about 120 allegations of abuse by scout leaders to law enforcement for further investigation, saying it believes victims and that the youth organization is working to identify "additional alleged perpetrators." The Boy Scouts issued the statement a day after a lawsuit was filed in Pennsylvania, accusing a scout leader in the state of committing "unspeakable acts of sexual abuse" against a boy during overnight camping trips and day excursions. The abuse included "hundreds of instances of fondling, hundreds of incidents of oral sexual assault and repeated attempts of anal penetration," according to the suit. "The Boy Scout Defendants' conduct was an outrageous violation of societal norms and went so far beyond all possible bounds of decency so as to be regarded as atrocious and utterly intolerable in a civilized community," the suit says.