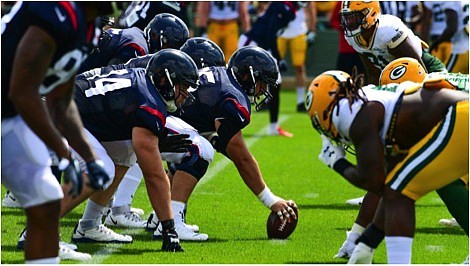 The Houston Texans will take on the Green Bay Packers on Thursday night at Lambeau Field in their first preseason action of the 2019 NFL season. Although fans won’t see a lot of snaps from starters on both teams, the game will begin to answer some questions Texans fans have been pondering during the off-season and some that have arisen within the last week.

The Texans suffered a major setback during a joint practice with the Packers on Tuesday when backup quarterback A.J. McCaron left the practice with a right thumb injury. He is expected to miss the majority of the preseason which will give Joe Webb a lot of playing time. Houston signed free agent quarterback out of Ole Miss, Jordan Ta’amu on Wednesday. He won’t see a lot of action, if any in this game, as offensive coordinator Tim Kelly and quarterbacks coach Carl Smith will need a week to bring him up to speed.

Fans have been waiting to see if the Texans have fixed their offensive line deficiency from the past. Rookies Tytus Howard and Max Scharping were drafted this past year will see their first NFL action. Expect to see those two get a lot of reps just to learn audibles, cadence, game speed, defensive line schemes, etc. Free Agent acquisition Matt Kalil will be out to prove that he is still serviceable after suffering through a host of injuries. Martinas Rankin must show the offensive coaching staff that he belongs.

Help Is on the Way

With the recent release of backup D’Onta Foreman, the backup position is up for grabs. And everyone, not named Lamar Miller, needs to perform against the Packers. All the backups will be given reps to see which one really wants the job. Also, pay attention to their play on special teams as the hustle and determination there could be a deciding factor moving forward.

Tonight will be the debut of former tight ends coach Tim Kelly as offensive coordinator. The offensive play calling duties has always belonged to head coach Bill O’Brien, so it will be interesting to see how he handles having someone else take over that responsibility. Although the plays will be very basic and generic, executing an offensive game plan designed by someone other than O’Brien is a must-see.

The Texans know that all questions won’t be answered in their first preseason game. Health first and then play on the field is their priority tonight. Kickoff is 7 pm CST.