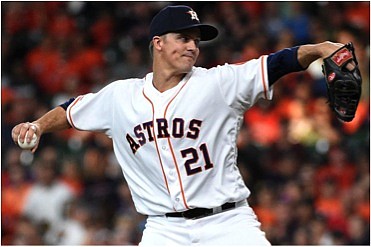 RHP Zack Greinke made his Astros’ debut in front of the largest crowd in attendance for a game this year (43,243) at Minute Maid Park and gave the fans a sample size of what they can expect heading towards the end of the season and into the playoffs. Although Greinke allowed five earned runs, three coming off of a homerun in the top of the sixth inning, he pitched a very efficient game.

The Astros defeated the Colorado Rockies 11-6 to win their 74th game of the season, which gives them their best 114-game record in franchise history.

“He impresses me with his intellect and how he approaches pitching,” said Astros manager A.J. Hinch of his newly acquired pitcher. “His preparation begins immediately for the next start. He has been preparing for this start for the last couple of days.”

Houston got on the board early when rookie sensation Yordan Alvarez blasted a 436-ft 2- run homer off of starting pitcher German Marquez (10-6). Alvarez, who won AL Rookie of the Month honors for July, became one of eight players in MLB history to record 43 RBI in his first 42 games. His homerun would start a scoring barrage that saw the Astros score in six straight innings. 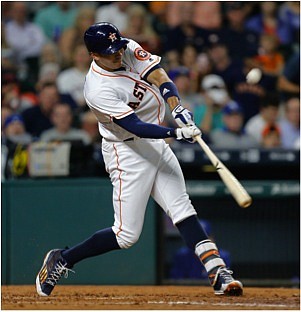 The Rockies would finally get to Greinke (11-4) in the fourth inning off of a sacrifice fly by 3B Nolan Arendando to close within two runs and then tie it up at five in the sixth with a three-run shot by CF Raimel Tapia.

The former Cy Young Award winner learned first-hand that his new team is good; I mean very good. Watching them from the dugout as they obliterate the Mariners in a weekend sweep is one thing. It’s another to be in jeopardy of losing your debut in front of a sold-out home crowd and see your teammates put up two runs in the bottom of the inning to help secure your first win.

'Sometimes it's a little awkward, but I feel pretty good here,'' said Greinke, who won his first game since July 5th. ''Guys make it really easy. So, it didn't feel awkward at all like some other times when I've been on new teams.''

SS Carlos Correa, who has a six-game hitting streak going, hit a solo homerun to help the Astros regain the lead in the bottom of the sixth inning and OF George Springer drove in Yuli Gurriel, who also added two home runs in the game, with a single to the right field. Houston would score four more runs in the next inning to put the Rockies away.

“It was a great team effort tonight,” Correa added. “The lineup is just really good. When you look one through nine, it’s a power lineup all the way around. We have put a lot of runs together lately and we are just trying to keep rolling.”