A community targeted: This time it wasn't a viral video or a racist tweet. It was something far more terrifying 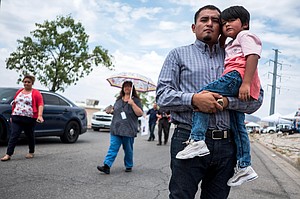 "I just hope we don't forget about it," he said. "If people see that nothing happens, it (violence) will continue to happen. ... Sometimes you are in the middle of history and you don't realize, this is big. And we cannot let it become normal. And it's becoming normal. That's for me the main worry."

In Wisconsin, Christine Neumann-Ortiz said the El Paso shooting immediately made her think of what she's seen unfolding in her own community -- from hate crimes targeting immigrants to teachers from immigrant backgrounds facing bullying at schools.

"There's no question that people recognize that they're being targeted, that a lot of protections they had in the past have been ripped away," said Neumann-Ortiz, , executive director of Voces de la Frontera, an immigrant advocacy organization. "There is more fear."

But that, she said, also is galvanizing more people to organize and fight for their rights.

"The Trump candidacy and presidency ... has really escalated the attacks broadly on everybody at once. And it's brought people together, without a doubt, and it's woken up people who had not been active into activism," she said. "I think the more rights we've lost ... the more clear things are."

People in El Paso are watching their backs

In El Paso, a city where more than 80% of the population is Latino, the devastation the shooting left behind is palpable days later. Even people who don't know the victims told CNN they're struggling to move forward after the attack.

"I always felt safe. And this was always somewhere where I could always feel confident that it would not happen here," 26-year-old Adriano Perez told CNN Monday evening at a vigil for the victims. "To find out that this was an act of domestic terrorism rooted in white supremacy ... was I think the real turning moment, where it was worse.

"Because now, he came here intentionally for the very same reasons that I love this city. ... He came here to attack our beautiful immigrant community where we care for one another, where we look out for each other."

Carmela Morales, 59, said she has been avoiding grocery shopping since the shooting. But on Tuesday her need for bottled water, ham and eggs forced her to head to another Walmart in the city.

She panicked in the parking lot when she saw a blonde man who seemed to be looking at license plates. She feared he could be another attacker, putting Latinos in his crosshairs.

"Now they are out, hunting us," she thought to herself, eying the man warily as she walked into the store.

The man turned out to be just another shopper, but still she rushed to gather up her groceries. Morales noticed some back-to-school deals but didn't even linger at the sale racks.

"I just didn't feel safe," she says. "I got my eggs, I got my water and I just wanted to get out of there."