Why American oil can keep booming despite crazy swings 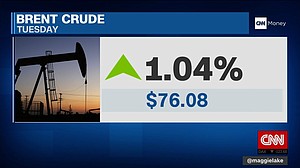 (CNN Money) -- Head-spinning price swings have returned with a vengeance to the oil market.

A few words from Saudi Arabia about OPEC and Russia pumping more sent crude crashing 8% in the span of just a few days. The dramatic sell-off wiped out a chunk of the recent spike above $70 a barrel that was driven by concerns about President Trump's sanctions on Iran.

Yet the crazy price moves are unlikely to derail the years-long recovery for the American oil industry from the 2014-2016 crash, which wiped out hundreds of thousands of jobs and sparked dozens of bankruptcies.

Enormous improvements in shale drilling technology have made oil companies more resilient than the last time they faced major volatility. US oil production is soaring and on track to shatter all-time records.

Equally important: The boom-to-bust oil industry is working hard not to repeat mistakes of the recent past. Companies have slashed costs, cleaned up their balance sheets and adopted a more disciplined approach aimed at avoiding expensive projects that can lead to financial trouble.

"The crash is still fresh in everyone's minds. They're trying to be much more conservative," said Muhammed Ghulam, an analyst at Raymond James who covers the sector.

While US oil prices had shot up in recent weeks beyond $65 and then $70 a barrel, most energy CEOs weren't banking on that to continue. Analysts say oil companies were budgeting for $50 to $55 oil -- and everything above that was icing on the cake.

"It might be a bumpier ride, but there probably won't be any bankruptcies or major job cuts any time soon. The companies that were going to go bankrupt would have done it at $26 a barrel," said Ghulam.

The oil rally hit major turbulence last week after Saudi Arabia, the de-facto leader of OPEC, said at a CNN-hosted panel that Russia and OPEC nations were in talks to pump more oil. That would be a big reversal from the production cuts that lifted prices dramatically over the past year.

"It is the intent of all producers to ensure that the oil market remains healthy, and if that means adjusting our policy in June, we are certainly prepared to do it," Saudi energy minister Khalid Al-Falih said.

While that's welcome news to American drivers grappling with $3-a-gallon gas prices, those words sent crude plunging by 4% on Friday, its biggest drop in nearly a year. Crude lost another 2.5% on Tuesday to about $66 a barrel. Major oil stocks like Chevron and Hess were also seeing red.

American energy companies are built to weather this storm.

Across the Permian Basin, the biggest US oil field, the average break-even cost for a project is around $45 a barrel, according to Raymond James. The firm estimates that in 2017 new US oil wells produced more than triple what they could in 2012.