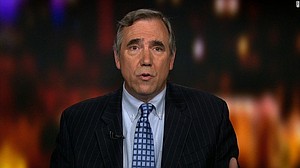 (CNN) -- Oregon Sen. Jeff Merkley returned to the South Texas border on Sunday with a group of Democratic colleagues to tour the Customs and Border Protection processing centers in the Rio Grande Valley.

The lawmakers came to South Texas, they say, to learn more about the agency's processing of undocumented immigrants entering the United States, including a policy to refer all people who cross the border illegally for criminal prosecution on top of immigration proceedings.

As a result of enforcing that policy, families who cross illegally have been separated from their children because those accompanying the children are put into the criminal justice system.

Both Gonzalez and Vela represent parts of the Rio Grande Valley in Congress.

Speaking after visiting a processing center in McAllen, Texas, several Democrats expressed anger at the family separations and called on the Trump administration to change its policy.

"When you have a mother tell you directly that she's in fear that she will never see her child again, and when the United Nations Human Rights Commission indicate to the Trump administration that you are violating human rights, then you know that what we are saying today is President Trump, cease and desist," Jackson Lee said.

Merkley said he had "spoken directly" with Attorney General Jeff Sessions about the policy and wanted to see if President Donald Trump would meet with them.

"We must end this policy of family separation," Merkley said.

Merkely also addressed the issue of those legally seeking asylum being separated from their families at the border. He told CNN's Ana Cabrera that he had heard "a number of stories of people who did cross at the official checkpoints who have also been charged with a crime and separated from their children."

Republican Sens. Susan Collins of Maine and Jeff Flake of Arizona, raised the issue in a Saturday letter to the departments of Homeland Security and Health and Human Services. The letter cites reports about a Honduran mother who sought asylum by presenting herself to authorities at an international bridge in Brownsville, Texas, and was separated from her 18-month-old child for months, as well as a similar case in Southern California.

The senators requested that the departments explain how and why family separations are occurring, if there are procedures in place to keep parents informed about their children and if the personnel who handle the children have training to make "the separation process less traumatic."

Later Sunday, Homeland Security Secretary Kirstjen Nielsen posted a statement on Twitter focusing on asylum seekers and denying any policy of separating families at the border.

"This misreporting by Members, press & advocacy groups must stop. It is irresponsible and unproductive," Nielsen wrote. "As I have said many times before, if you are seeking asylum for your family, there is no reason to break the law and illegally cross between ports of entry."