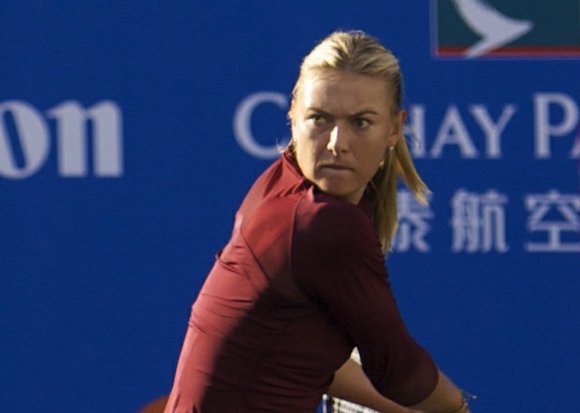 (CNN) -- She escaped a clash with old rival Serena Williams but Maria Sharapova came up against a brick wall in the shape of Garbine Muguruza in the quarterfinals of the French Open.

Two-time champion Sharapova was gifted a walkover when Williams pulled out injured ahead of their last-16 tie, but the Russian's Paris progress came to a crashing halt with a 6-2 6-1 defeat by Spain's 2016 winner Muguruza.

Sharapova was back at Roland Garros for the first time since a 15-month suspension for testing positive for the banned heart drug meldonium ended last April, but her comeback has been beset by injury and she has been well short of the form that delivered five grand slam singles titles.

The 31-year-old made 27 unforced errors compared with third-seed Muguruza's 15 and took 29 minutes to win her first game of the match on Court Philippe Chatrier.

The 24-year-old Muguruza, who won the French Open two years ago and added the Wimbledon title a year later, wrapped up victory in just 70 minutes for her first win against Sharapova in four matches.

"On paper it's a step in the right direction," Sharapova told reporters afterwards.

She was also asked about Williams' comments ahead of their scheduled match that stories published in Sharapova's new autobiography were "hearsay."

Sharapova, who writes how Serena issued "guttural sobs" after losing to her in the 2004 Wimbledon final, said: "Well, I think it would be strange for me not to include someone that I have competed against for so many years.

"Some of those matches were very defining for me. When you're writing an autobiography I don't think there's any reason to write anything that's not true."

Muguruza, who also received a virtual walkover in her previous encounter as Lesia Tsurenko retired hurt at 2-0 down in the first set, will meet world No.1 Simona Halep in the semifinal.

The Romanian fought back from a set down to beat Germany's Angelique Kerber 7-6 6-3 6-2 as she chases a first grand slam title.

The 26-year-old Halep has been in the finals of three major tournaments, including at Roland Garros in 2014 and 2017.