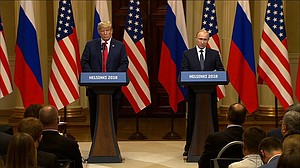 (CNN) -- President Donald Trump can find a mean word to say about almost anyone: Pope Francis, a Gold Star family, Arizona Sen. John McCain, a disabled reporter, and on and on and on.

One person appears to be an exception to that rule: Russian President Vladimir Putin.

Time and time again over his nearly 18 months in office, Trump has resisted saying anything bad about Putin. Which is weird because, well, Russia conducted a broad and deep attempt to influence the 2016 presidential election. And which is relevant because Trump is meeting with Putin on Monday, despite the fact that special counsel Robert Mueller indicted a dozen Russians on Friday because of their connections to the election meddling operation.

I asked Point-er Brenna Williams to dig up everything -- or as much as she could find -- Trump has said about Putin since he was inaugurated in January 2017. Though not a comprehensive list, here are some of the most notable things the President has said about his Russian counterpart -- in reverse chronological order. (You can also see what Trump said about Putin -- HINT: It's almost all nice stuff -- before he became President.)