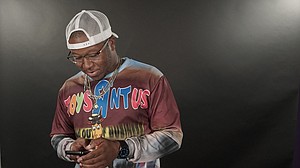 John Fuggin Dough is back with another release letting the world know, hip-hop is far from dead. Known for his hit single, "Tubmans" which is projected to be on his highly anticipated debut project at the first quarter of the year, Dough delivers "Down And Out" ("Lift Yourself" Freemix). His newest drop obliterates the sped up vocals on top of Kanye's "Life Yourself" which was dubbed from the 1973 Amnesty song "Liberty". Dough speaks about a plethora of things on this track. It's a cross between paying homage to New Orleans, LA, his up-bringing and letting the world know he cannot be counted out. Dough has been popping up in different cities from Chicago to performing in front of the mayor of Virginia with in this month alone as he builds momentum to release some original material off his forthcoming project.

Check out "Down And Out" ("Lift Yourself" Freemix):

John Fuggin Dough "Down And Out" ("Lift Yourself" Freemix)

For his latest music, merchandise and forthcoming shows visit www.johnfuggindough.com