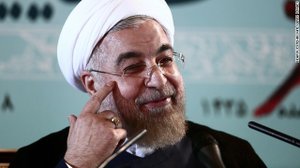 (CNN) -- Iran's newly re-elected President has not included any women in his proposed list of 17 ministers, according to Iranian state media, reneging on an election pledge to his largely reformist base.

Hassan Rouhani presented his list of Cabinet nominees for all but one of the 18 minister roles on Tuesday.

The exclusion of women from the proposed list was widely expected, though appointing a female minister was a central promise made by Rouhani during the election campaign.

During his first term, the moderate president appointed several female vice-presidents, which are lower ranking roles than ministers, but are still members of cabinet. Rouhani's predecessor, Mahmoud Ahmadinejad appointed the Islamic republic's only female minister, Marzieh Vahid-Dastjerdi, as health minister in 2009.

Al-Monitor's Iran Pulse Editor Mohammad Ali Shabani said there had been hope that "Rouhani would not reconstitute the taboo broken by Ahmadenijad."

"We're talking about a grander clash about the vision of women's role in society," he said.

But Shabani added that Rouhani is first and foremost a pragmatist who is keen on building bridges with hardliners.

"I think (Rouhani) is trying to convey a message to his opponents that in terms of values we are the same," he said.

Parliament will have to approve

Rouhani's new proposed Cabinet has yet to be approved by Parliament, but the list includes two prominent ministers from his first term: Minister of Foreign Affairs Javad Zarif and oil minister Bijan Zanganeh. The key appointments suggest Rouhani will continue with foreign and economic policies that center on opening up the country and seeking investment.

The President won a landslide re-election on May 19, after campaigning largely on social reform. His campaign also touted the merits of the nuclear deal with the United States, the European Union and other partners.

Rouhani was sworn in for a new term on Saturday. In an address in front of more than 100 foreign dignitaries, he accused the US of undermining the 2015 nuclear agreement between Iran and the major world powers.