Manafort Request for Leniency Met With a Final Sentence: 7.5 Years 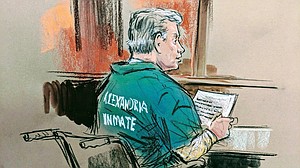 Former Trump campaign chairman Paul Manafort was sentenced Wednesday to a total of 7.5 years in federal prison for financial crimes stemming from twin cases from the special counsel's office.

Appearing at his second sentencing in as many weeks, Manafort switched gears from the contentious approach he and his attorneys had taken previously and apologized, asking for lenience and no additional prison time so he could take care of his wife. Instead, the judge gave Manafort a full rebuke for his public posturing and his crimes before delivering the sentence.

"There was no question this defendant knew better and he knew exactly what he was doing," US District Court Judge Amy Berman Jackson said in the final minutes in court with Manafort Wednesday.

Jackson ordered Manafort to serve an additional 43 months on federal conspiracy and obstruction charges, on top of a 47-month sentence he already received for financial convictions from a jury in Virginia.

Manafort, 69, will get credit for nine months he's already served in jail, and if he gets credit for good behavior, could be released from prison in about six years. He will also serve three years on probation and pay millions in restitution for tax fraud.

While some developments in Manafort's case and at other Mueller sentencings have been surprising and dramatic, the proceeding Wednesday was low-key, though it covered a wide range of legal arguments.

After almost two hours of discussion, Jackson took a break then returned to the bench. She methodically outlined how the case took shape, landing her sentence after she described how Manafort deceived the American public, and how secret lobbying on behalf of foreign governments in the US hurts democracy.

Even after Manafort pleaded guilty and admitted to his crimes in September, he "backed away from the facts," Jackson said.

"What you were doing was lying to members of Congress and the American public," she told Manafort.

The biggest surprise came moments after the hearing adjourned, when the Manhattan district attorney revealed a new case against Manafort involving alleged business and mortgage fraud offenses in violation of New York state law -- a set of 16 charges for which, if he is found guilty, could not be pardoned by President Donald Trump, who only has power over federal cases. Manafort has not yet appeared in court for that case.

Collusion not part of this case

After the sentencing, Manafort's attorney Kevin Downing criticized Jackson for what he perceived as hostility toward Manafort.

Yet throughout the hearing, Jackson gave credit to Manafort for pleading guilty and admitting to his crimes last fall, and made clear she was not judging Manafort as a person on the whole. She would not factor in the political hubbub around the high-profile case either, she said.

She did, however, acknowledge Manafort's work on the Trump campaign, saying he brought intelligence, "real structure" and skill to his most recent campaign work.

Jackson noted several times during the hearing how Manafort's case interplayed with Mueller's investigation into Russian coordination with the Trump campaign in 2016 -- and how it did not.

Collusion or conspiracy related to the election was "not presented in this case," Jackson said Wednesday, "Therefore it was not resolved by this case ... one way or another."

She told Manafort that his lawyers' arguments about the absence of any collusion charges were "just one more thing that's inconsistent with the notion of any genuine acceptance of responsibility."

In a plea cut in September 2018, Manafort admitted to money laundering, tax fraud and illegal foreign lobbying connected to his years of lucrative work for Ukrainian politicians, as well as defrauding banks to supplement his income with cash through mortgages.