A helicopter crash-landed on the roof of a New York City skyscraper. Then the building shook 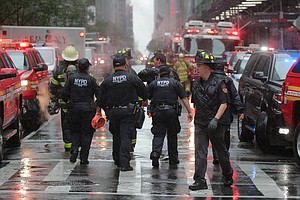 (CNN) -- A typical afternoon inside the offices of a Midtown Manhattan skyscraper suddenly turned to chaos Monday when a helicopter, 11 minutes into its flight, crash-landed on the roof.

Floors of the building shook. Before the alarms started to blare and workers understood what was happening, security was ordering people to grab their belongings and evacuate out into the rainy, foggy streets of New York.

Frantic employees squeezed into the stairwell, hurrying down flights, unaware that a helicopter had crashed on top of their building, leaving one person dead.

"It took a half hour to get from the 29th floor down to the ground floor. There were just too many people; it was too crowded, and everybody was trying to get off on all the floors at the same time," Nathan Sutton said, standing outside 787 Seventh Ave.

"You could feel the building shake, and you could actually hear the alarms," he said.

The pilot, identified as Tim McCormack, died in the crash, law enforcement said.

City officials breathed a sigh of relief that no was injured inside the building or on the streets below. Yet they said Monday afternoon they were not sure what led the pilot to crash-land atop a building without a helipad.

Based on interviews investigators conducted at the East 34th Street Heliport on Manhattan's East Side, the pilot made statements that he believed he had a 5-to 7-minute break in the rainy weather to take off, according to a law enforcement source familiar with the investigation. The pilot did not refuel at the heliport, the source added.

Once the pilot was in the air, he radioed back to the heliport and said he needed to return. The last time the pilot communicated with the heliport he conveyed he was unsure of his location, the source said.

'My mind goes where every New Yorker's mind goes'

Lance Koonce was one block away from 787 Seventh Ave. when he heard something that sounded like a helicopter flying low. He saw a sheet of flames and smoke when he looked out the window.

Morgan Aries was inside the crash site on the 14th floor.

"We felt a little bit of a tremor," he told CNN.

The order to evacuate came minutes later, he recalled.

"There was a moment in which we all couldn't get out of the building because we're all just backlogged in there," Aries said.

Gov. Andrew Cuomo was among the New Yorkers who said the crash brought back memories of the September 11 terror attacks at the World Trade Center in Lower Manhattan.

"If you're a New Yorker, you have a level of PTSD from 9/11," Cuomo said. "And I remember that morning all too well. So as soon as you hear an aircraft hit a building, my mind goes where every New Yorker's mind goes."

Despite the scare, inspectors and engineers found no evidence of structural damage to the tower and determined the building does not pose a danger to the public, according to Andrew Rudansky, senior deputy press secretary for the New York City Department of Buildings.