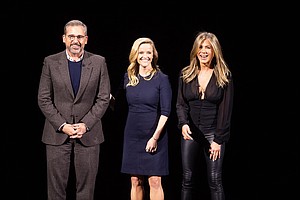 (CNN) -- Reese Witherspoon, Steve Carell and Jennifer Aniston are ready to give viewers the full story on "The Morning Show," a new drama coming to Apple TV+.

Apple on Monday released the first look at the series, which is set to debut this fall.

No actual footage of the stars in action is shown in the minute-long sneak peek, but moody shots of hallways set the tone for the preview.

The overlapping voices of Witherspoon, Carell and Aniston are also heard in a cacophony of dramatic moments.

"I'm a journalist, I can feel when the world needs me," Carell can be heard saying at one point.

"People want to trust that the person telling them the news of the world is an honest person," Witherspoon's character says at another.

"The Morning Show" was one of several shows Apple highlighted earlier this year at an event previewing the content coming to the forthcoming streaming service. (CNN's Brian Stelter is a consultant on the project, for which his book was used as background.)

The show, Witherspoon said at the event, pulls back "the curtain on "the power dynamics between men and women in the high-stakes world of morning news shows."

"It's a real insiders view into the lives of the people who help America wake up every day," she added.