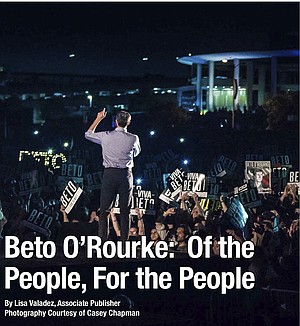 O’Rourke has captivated Texans with his authentic personality, passion for the people and willingness to be an active listener. To have the desire to grasp what people unlike him of a different race, nationality, gender, socioeconomic status and more - what those people are looking for in their politicians. What necessary steps need be taken in order to improve their lives, both economically and socially.

His beliefs and stances on the issues are actively displayed on television, in print media as well as his campaign website: BetoForTexas.com. Most of all, he wants to find common ground, even in areas where we may not see it.

HSM: The viral video, the momentum gained – how have things shifted/changed for you and your campaign?

Beto O’Rourke: People have been texting me about it, some agree and others disagree. I appreciate hearing from everyone on this but I know this is a conversation we must have. If in someway, I have been helpful in moving that conversation forward then I am very grateful to have been a part of that. I think it is connected to other issues we are running to address and that includes equality of opportunity, equity, and education along with the disproportionate burden born by communities of color when it comes to the criminal justice system. I think ultimately for me, I think it is ensuring everyone can live to his or her full potential and we are not there in this country yet.

HSM: Our readers have reached out to us in the past Presidential elections and some were not compelled to vote because some felt there wasn’t a candidate that they truly supported. Some even stated, “here is another White person coming to the Black community for a vote. That’s all they want – a vote and that’s it.”

O’Rourke: Here I am. I will continue to show up everywhere for everyone. For those that have been written off and for those who have been taken for granted. For those that have been made to believe that they don’t count. We are going to the people in their homes, having round table meetings – it’s where our team spends its resources. We don’t listen to PAC’s or special interest groups, instead, our focus is on the priorities of the people – all people – Criminal Justice Reform – and it’s not just the talk, co-sponsoring legislation that would end the cash bail system in Harris County and the state of Texas. Leading on medical care for all so that people who suffer mental illnesses don’t have to purposely get arrested to get medical treatment at the county jail, which I was able to witness recently when I visited. Public education – ensuring that we extend the public education system so that it begins in Pre-K universally for every child and make it a full day so that every child begins at the same starting line.

So these any many other issues, including being treated equally under the law –

these are important issues expressed to me and I am actively listening to each and every one of them .

There is so much greatness to be said about O’Rourke. He continues to wow me and countless others at each and every town hall gathering. At this point, I can only tell you, the reader, to stop reading and go to an O’Rourke rally and to experience exactly what I witnessed the very first time I met Beto O’Rourke in early 2017.