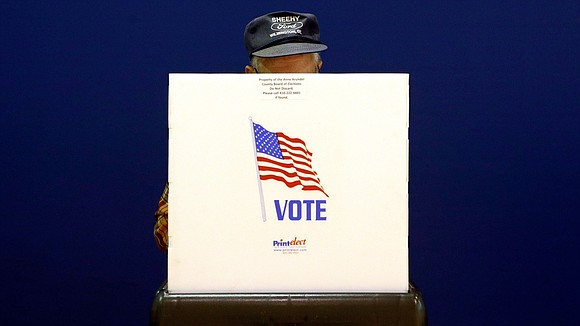 A voter fills out a ballot at a polling place in Pasadena, Maryland, on Tuesday, November 6, 2018.

(CNN) -- With hundreds of political seats up for grabs Tuesday, the stakes are incredibly high. That's why CNN will be covering the midterm elections nonstop from across the country -- on air, online and on your phone.

Here's a quick look at all the ways you can stay on top of the breaking news:

CNN will livestream election coverage without requiring logging in to a cable provider from 5 p.m. ET Tuesday until 9 a.m. ET Wednesday.

The livestream will be available on CNN.com's homepage and on mobile devices via CNN's apps for iOS and Android. It can also be viewed on CNNgo (at CNN.com/go on your desktop, smartphone, and iPad, and via CNNgo apps for Apple TV, Roku, Amazon Fire, Chromecast and Android TV).

Joining them will be CNN Chief Political Correspondent Dana Bash, who will be tracking the Senate races, and CNN Senior Political Reporter Nia-Malika Henderson, who will be covering the gubernatorial races around the country.

And CNN correspondents will be dispersed across the country, reporting from key battleground states.

For late-night on air coverage, Chris Cuomo and Don Lemon will anchor live from the CNN Election Center. CNN Congressional Correspondent Phil Mattingly will report from the CNN Magic Wall, and correspondents Jeff Zeleny, Sunlen Serfaty and Joe Johns will continue reporting on the midterm elections.

CNN Digital will provide unique election coverage across all platforms as the battle for congressional control heats up. Real-time results, data-driven reporting and exit polls for Senate, House and gubernatorial races will be published to America's Choice 2018.

Select ballot measures at the state, district and county level will also be highlighted at www.cnn.com/election/2018/results.

Throughout Election Day, a live blog on CNN.com will be the home for coverage and analysis of voting and the election night results.

"The Forecast with Harry Enten" will also forecast key races throughout the night. Visit CNN.com/Forecast to explore the House and Senate interactive pages and get the latest predictions.

CNN en Español will have special coverage all day on air and online at cnne.com/votolatino. Starting at 5 p.m. ET Tuesday, anchors Juan Carlos Lopez, Alejandra Oraa, Fernando del Rincon and Guillermo Arduino will broadcast the latest news. CNNe correspondents will also report on key races from across the country.

CNN International will broadcast special programming to a global audience starting at 5 p.m. ET Tuesday and into Wednesday as results come in.