Mother body-shamed on airplane thanks man for intervening 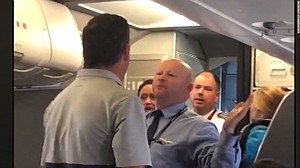 He said he just happened to see that guy’s text messages he started shaking he was so mad and knew he had to do something. He stopped the flight attendant and told her what he was about to do. I told him thank you for what he did and that it meant the world to me - and that he would be my husband’s new favorite person. The flight attendant kept trying to give him free drinks and told him that he was her hero.

So - this guy’s name is Chase - he works for Whiskey Row in Nashville. Share this post, look him up- whatever - he did prove to me today that (1) not only does God see me, but (2) there are more good people in the world than bad."