Football Comes From Behind To Post Homecoming OT Win 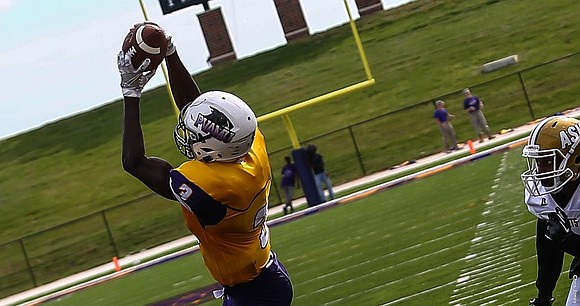 A pair of games in the new facility, a pair of thrilling come-from-behind wins for Prairie View A&M football in the new Panther Stadium.

"It's why we play the game," said Prairie View A&M head coach Willie Simmons. "I'm happy for these young men. I thought they grew up a lot today. It's a big win for this program for homecoming with a sold out crowd. I know everyone wanted to come out of here with a win. We get down early. Guys never quit."

Morton replaced an injured Trey Green in the second quarter. Trailing 17-7 at halftime, Morton, a redshirt freshman playing for the fifth time in six games this season, led the three critical scoring drives, none more important than the game-tying 79-yard drive.

Starting at the one-yard-line with 2:31 to play, Morton completed four passes for 67 yards and rushed for an additional 12 to move the Panthers into field goal range. Owen Hoolihan's (Oberon, NSW, Australia) 37-yard field goal with 12 seconds remaining tied the score at 17-17.

In the extra period, Morton's nine-yard scramble on third and nine gained a critical first down. Caleb Broach's (Rockwall, Texas) touchdown after recovering his own fumble at the 1, gave Prairie View A&M its first lead of the game.

"Everyone rallied around Jalen," Lastrappe said. "Even if it was a bad play, everyone was saying 'Keep going Jalen, keep pushing. He came through.

On the ensuing possession, a combined sack by DeVohn Reed (Houston, Texas) and Marquice O'Leary (Fontana, Calif.) on third down followed by the sack by Treveon Billings (Milwaukee, Wis.) on the final play of the game sent Panther Stadium into a frenzy of ecstatic fans, alumni and supporters.

"The confidence was very high," Lastrappe said. "We had great faith. We knew we were going to win this game. We knew the defense was going to play great. They came out in the second half and pitched a shutout. That was a great performance. Hats off to the defense."

"Jalen Morton came in and played a fantastic football game," Simmons said. "He got us out of some bad plays with his legs (11 rushes, 53 yards), and had a huge 79-yard drive late in the game to get us in field goal position. Owen Hoolihan knocked the field goal through to get us into overtime. We scored on the first drive (of overtime) and the defense stepped up, and kept them out of the end zone the whole second half. Great team win. I'm proud of the guys, and we get some much-needed time off this week."