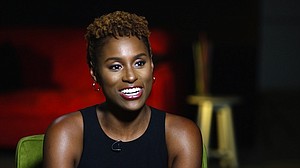 True, the actress is poised for a big break through with the Sunday premiere of her HBO comedy "Insecure." But Rae has been in the game for more than a minute.

She first found fame with her 2011 web series "The Misadventures of Awkward Black Girl." As with "Insecure," Rae served as both creator and star of the show which followed the life of "J," a young black woman who is as socially awkward as she is addicted to hardcore hip hop.

"Awkward Black Girl" racked up millions of views, snagged Hollywood's interest and led to Rae being dubbed "the black Tina Fey." But with Oprah Winfrey and mega-producer Shonda Rhimes among her fans, Rae has already made a name for herself.

In "Insecure," which she co-created with comedian Larry Wilmore, Rae stars as Issa Dee -- a 29-year-old woman in the midst of reevaluating her stagnant career and relationship. Helping with that is her best friend Molly, professionally successful but unlucky with love.

Rae recently talked to CNN about being on HBO's roster, why she doesn't want to be the spokeswoman for all young black women and Drake.

You know the main question everyone is going to have is how much of Issa Rae is in the character of Issa?

I say it's me, but if I didn't know what I wanted to do and if I made different decisions. I think the essence of me is definitely there, but I think I'm more empathetic than the character. But for the most part, what you see is what you get.

What makes you feel insecure?

I'm very socially anxious. I'm always wondering how people perceive me, wondering if they can tell I'm uncomfortable. Just the idea of failure, for sure, makes me insecure -- that I don't have a place and I'm not doing this right. I will say that definitely over time, I have become more confident. And of course, the typical women things of body insecurities and appearance. At this point, you get what you get.

When I lived in Los Angeles, I was struck by how people try to come across as if they are so together when really they are a mess. How do you deal with that?

I just don't. I don't feel the pressure because all the pressure is just in my own head, for me, and it's been like that since the sixth grade for me. I know my league and I know my lane. I'm not going to be out here trying to be the baddest reality girl. I'm not the model. I'm not going to be on the 100 most beautiful people of the world list. Those aren't my aspirations. I just want to tell good stories and work behind the scenes to make a change.

I feel like you are officially the new spokesperson for 20-something-year-old black women.

I don't want it. What the hell? I'm not. I'm the spokesperson for me.

I love that people can relate and can see themselves in the work. That makes me so happy, but that's not what I am setting out to do. I'm very much aware that I am not telling every black woman's story. People are going to watch this and say, "That is not me. Nope. That's stupid. Who would do something like that?"

I have to ask you about the "as fk" title for every episode (i.e. the first episode is titled "Insecure as Fk," while episode two is "Messy as Fk" and so forth). Where did that come from?

It's how I talk. It's how we talk. I wanted to have a creative title scheme because I love what "Better Call Saul" does. I knew I wanted to have another adjective so I was thinking "Insecure..." and "confident," or whatever.

One of our writers, Ben Cory Jones, was like "Why don't we just do as fk?" Everyone in the room was like "Whoa! Yes, yes, that's what we're doing."

We spent the rest of the day assigning adjectives to each of the titles, shooting each other down if it was terrible and clapping and toasting when it was right.

I would like to thank you for bringing back the concept of black girlfriends because so often when we have these strong black female characters on TV, they are solo. I love the relationship that Issa and Molly have on the show.

It's so real to life. My girlfriends are everything to me. They are the reason I am here today. They're who I can lean on and who I can complain to. We just haven't had the chance to see since [the series] "Girlfriends."

On reality TV, we are always depicted as plotting against each other, as fighting, as not being there for each other. That's just not my experience with the black women I know. It wasn't hard to be able to draw from real life friendships to put in our show.

What scoop can you give us about the season? Will there be any interesting guest stars?

We have a couple musical guest stars that make acting debuts. Without giving too much away, I'm just excited for the audience to see the growth of every character and every relationship. Parts of it may catch people off guard, but in a great way.

Above all, I want everyone to watch.

I know you love [rapper] Drake, so I've got to ask. Is Drake going to be on the show?

I wish. Actually, I don't wish.

But he makes an appearance in that there is a Drake lyric or some sort of reference to him in every episode. He's all up in and through this show.