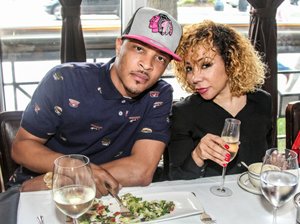 T.I. and Tiny already have a large family, with two of their own children, and four from previous relationships, but yesterday, the Clifford household got a brand new addition, with the birth of the couple's third child together (and seventh overall), a baby girl.

News of the arrival of Tip's daughter first leaked through The Shade Room, who tracked down a post from Tiny's niece.

Later on, Tip confirmed the birth of his baby girl on Facebook, expressing that he wasn't able to be with his wife at this very special moment, and was upset that the news had broken outside of their own announcement. Still, it's hard to be mad when you just welcomed a new human being into the world, and he celebrated the arrival of "Lucky 7," but didn't reveal the name of his new daughter.

What really pisses me off is that I'm in SouthCarolina & my wife just had our baby in Georgia which is really not something anybody could help & the fact that everybody gets to announce that "T.I. & Tiny welcomed their baby into the world" EXCEPT T.I. & Tiny. Couldn't even wait until we properly announced it but ‪#‎Lucky7‬ is here!