An Evening with the Legendary Christopher Cross 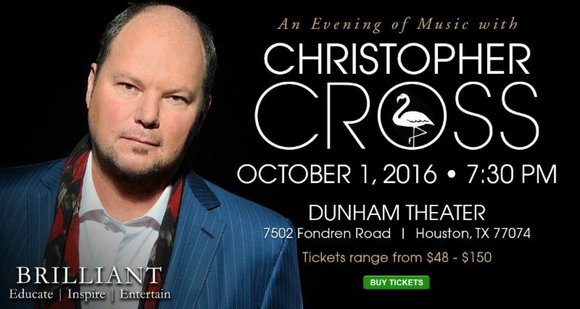 Christopher Cross has virtually defined adult contemporary radio with a series of smoothly sophisticated ballads including the #1 hit, "Sailing." Christopher Cross' 1980 self-titled debut album with the lead single "Ride Like the Wind" rocketed to the #2 spot; the massive success of the second single "Sailing" made Cross a superstar. In the wake of two more Top 20 hits, "Never Be the Same" and "Say You'll Be Mine," he walked off with an unprecedented and record-setting five Grammys in 1981, including Best New Artist and Song of the Year for "Sailing." He soon scored a second #1, as well as an Academy Award, with "Arthur's Theme (Best That You Can Do)," which he co-wrote with Burt Bacharach, Carole Bayer Sager, and Peter Allen for the smash Dudley Moore film comedy Arthur. Cross' much-anticipated second album Another Page produced the hits "All Right," "No Time for Talk," and a Top Ten entry for "Think of Laura," a song featured prominently in the daytime drama, General Hospital. Cross charted 8 songs into the Billboard Top-40 charts between 1980 and 1983. Eight hit singles, multiple world tours, five Grammys, and an Academy Award has marked Christopher's meteoric rise to the top.

VIP tickets include: Premiere Box seating and private meet & greet after the concert with Christopher Cross.