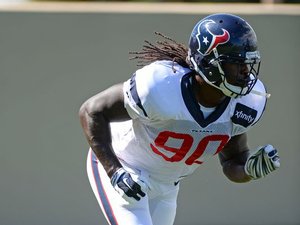 HOUSTON – Houston Texans DE Jadeveon Clowney was named to the 2017 Pro Bowl, the NFL announced today. The game will be played at Camping World Stadium in Orlando, Fla. on January 29, 2017. This marks the 13th consecutive season that the Texans have had at least one player elected to the Pro Bowl.

“I’m excited to be selected to my first Pro Bowl,” said Clowney. “I want to thank Coach O’Brien, Coach Crennel, Coach Vrabel and Coach Weaver for believing in me and pushing me to get to his point. It’s an honor to be recognized with the best players from around the NFL. I’m going to continue to work to help my team win games.”

In his third season with the Texans, Clowney will be making his first trip to the Pro Bowl. He has set single-season career highs in tackles (49), sacks (5.0), tackles for loss (15) and quarterback hits (16), while starting 13 games this year. Clowney leads the team and ranks tied for fourth in the NFL in tackles for loss and is one of only four players in the league with multiple games with three-or-more tackles for loss.

Clowney is part of a defense that ranks first in the NFL in total net yards (306.5) and first downs (17.2) allowed per game, second in net passing yards allowed per game (203.5) and sixth in opponent third down percentage (36.3). Since Week 8, the Texans have only given up 70.6 net rushing yards per contest, which also leads the league.